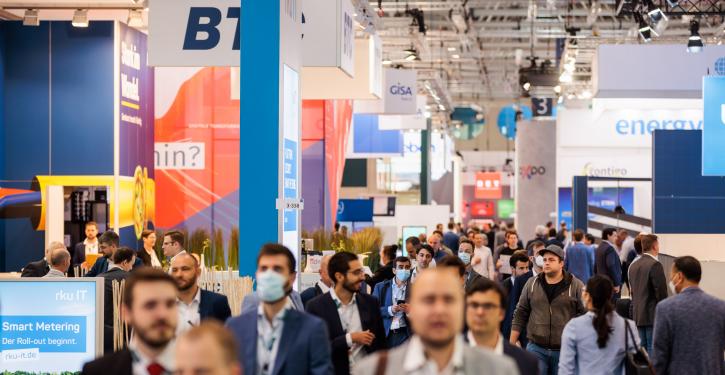 Even if it doesn't look like it in the picture: The number of visitors at E-world dropped significantly. (Image: E-world energy & water)
Essen (energate) - Despite fewer exhibitors and visitors, the first edition of the industry trade fair "E-world energy & water" since the beginning of the corona pandemic exceeded the expectations of the companies. However, these expectations were also rather manageable in advance after the two-year forced break, as energate learned in numerous conversations. "At first we thought we would roll out a carpet and put out two deckchairs, because nobody would come anyway," said one exhibitor in conversation with energate. Another exhibitor said that she had had "the worst fears" in the run-up, and that there had been numerous cancellations at the beginning of the week. Several market participants reported that it had generally been difficult to arrange appointments beforehand.

In retrospect, however, the exhibitors were optimistic to euphoric about the course of the fair. Many reported interesting discussions. "The fair was definitely worthwhile," said one exhibitor. Despite the difficult situation, a spirit of optimism could be felt everywhere, said an energy expert. The market is changing - also due to the gas price crisis - and companies are turning to new topics. With record prices, companies are taking old project ideas out of the drawer that had not paid off before. Klaus Müller, president of the Federal Network Agency, was not entirely comfortable with the positive mood. It reflected neither his personal nor his current daily work.


Admittedly, the fair had fewer visitors this year - according to the organiser, there was a decline of about 30 per cent, and on the last day of the fair the halls seemed partly deserted. But "the important visitors were there", said one exhibitor. Most companies had sent representatives to the fair - but in smaller numbers. There were several reasons for this: Firstly, many employees are probably needed on site at their companies due to the current crisis situation, secondly, summer holidays have already started for some and thirdly, companies are still acting more cautiously, also due to the corona pandemic. However, there was little evidence of this caution at the fair itself - only very few people wore masks, and gatherings at the stands were well attended.

The number of exhibitors declined less than the number of visitors. Compared to E-world before the pandemic, 90 per cent of the exhibitors were back and 90 per cent of the exhibition space had been rented, said Stefanie Hamm, managing director of E-world GmbH. She was very satisfied: "We are very, very happy to be able to hold an E-world again after more than two years." The mood among exhibitors and visitors was "excellent" and everyone was already looking forward to the fair next May.


It is not clear whether May will remain as an E-world date permanently, but next year the fair still wants to play it safe, Hamm said. "We don't know how the autumn and winter will develop on the corona side and because our exhibitors have suffered a lot from the fact that we had to postpone so often and thus also had costs that can no longer be recouped, we now want to plan in May."

Traditionally, E-world takes place as one of the first major annual events of the energy industry in February - not infrequently in snow and ice. This year, too, the trade fair company held on to the February date for a long time - and received some strong criticism from the industry for it. However, some seem to have grown fond of the February date. One participant said that E-world had always been a nice event to start the year. And another trade fair participant remarked that an indoor event would be better placed in the already cold winter. /sd

Transparency note: The organisers of E-world include Conenergy AG, to which the trade publisher energate also belongs.