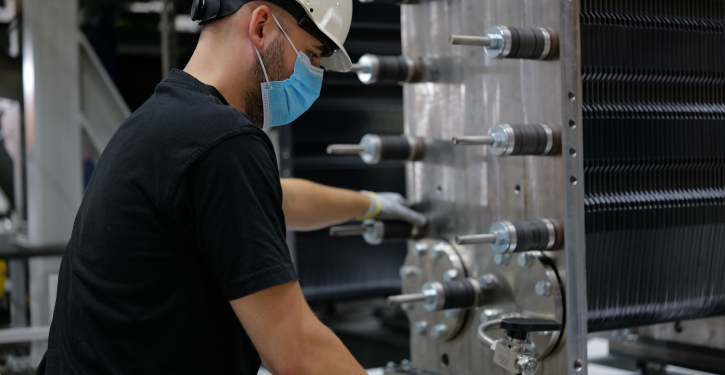 The headquarters of the new company will be in Berlin, where the PEM electrolysers will also be manufactured. (Image: Siemens Energy)
Munich/Paris (energate) - The announced cooperation between Siemens Energy and the French gas group Air Liquide on hydrogen is taking shape. The two companies have now founded a joint venture for the industrial production of electrolysers. Production of the first PEM stacks for the European market is to begin in the second half of 2023, the companies jointly announced. By 2025, the annual production capacity is to increase to 3,000 MW. Siemens Energy will hold 74.9 per cent of the shares in the joint venture, with Air Liquide holding the remaining 25.1 per cent. The joint venture will have its headquarters in Berlin. The electrolyser production will also be located there, as has been known since March this year (energate reported).


There is no name for the new company yet, a Siemens spokesperson explained in response to an energate enquiry. The official approvals for the foundation are also still pending. At the beginning of 2021, Siemens Energy and Air Liquide had already announced their intention to bundle their competences in the field of PEM electrolysis more strongly (energate reported). The proton exchange membranes (polymer electrolyte membranes, PEM) used are characterised by high efficiency and are particularly suitable for flexible operation with volatile renewable energies, they said. In the first joint project "Normand'Hy" in Normandy, France, the partners want to build up electrolysis capacities of 200 MW. The assembly of the electrolysis systems for this project is to take place in France.

Within the framework of the partnership, the two companies also want to make R&D capacities available in the future in order to jointly develop the next generation of electrolysers. As a sales market, the company will primarily have Europe in mind. "We want to be a driving force for hydrogen technology," commented Christian Bruch, CEO of Siemens Energy. /ml