Package of measures to unleash hydrogen 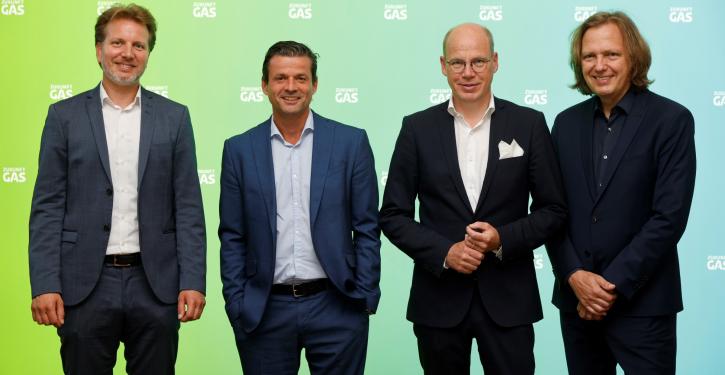 A study commissioned by Zukunft Gas and presented at E-World calls for better market conditions for hydrogen. (Image: Zukunft Gas)
Essen (energate) - A uniform European definition of hydrogen, a certificate of origin system for trade and the inclusion of hydrogen in the Building Energy Act are the three most important levers for the market take-off. This is the result of a study conducted by the Ikem Institute together with the consultancy Conenergy Consult on behalf of the industry initiative Zukunft Gas."The basis for all further steps is that renewable and low-GHG hydrogen is understood in the same way in all laws," Simon Schäfer-Stradowsky, Managing Director of IKEM, said at a press briefing at the start of E-world. The delegated act from the EU side, which is not expected until 2024, must definitely be preponed to this year.

The study, which analyses a total of 13 legal and economic measures, does not propose a concrete CO2 threshold value for the definition of low-emission hydrogen, which, depending on the design, would also allow natural gas in production. With a view to the different sectors, values of about 25 to 32 g CO2 are currently being discussed with the various stakeholders, Schäfer-Stradowsky explained in response to a question from energate. The green or low greenhouse gas quality in the building sector (via the GEG), via quotas in transport and in agriculture (in the case of input materials) should be creditable.


According to Håvard Nymoen, managing director of Conenergy Consult, the second and perhaps even more decisive lever for "unleashing hydrogen" is a Europe-wide system for mass balancing in trade. While the Renewable Energy Directive (Red II) and the Gas Supply Directive address verification, implementation has stalled, he said. "We can sell organic oranges from Spain as organic in this country. But we can't sell green hydrogen from Spain as green hydrogen for Thyssenkrupp," Zukunft Gas board member Timm Kehler criticised at the press conference.

Basically, according to Kehler, the EU's high demands on production are blocking a sufficient supply of hydrogen. As examples, Kehler cited the required additionality of renewable plants, temporal and spatial correlation of production, and the exclusion of double subsidies for renewable plants and electrolysers. This would make it unnecessarily difficult for the steel industry, "where we will first see significant quantities of green hydrogen". He compared the establishment and design of the European hydrogen trade with the founding of the Coal and Steel Community at that time.


Hydrogen in the heat sector


Arnt Baer of the North Rhine-Westphalian utility Gelsenwasser appealed to politicians to reconsider their persistent "no" to hydrogen use in the building sector. In his network area there are many multi-storey residential buildings from the 1970s with a high proportion of gas heating, he said. Baer added that even in the past, it was quite difficult to convince customers to install a new heating system. "In recent weeks, the price development has made it even less realistic," Baer said, who called for more realism in the government's goal of only installing heating systems with a 65 per cent share of renewables from 2024.

His Gelsenwasser colleagues also see problems from the grid side due to the high heating demand in individual districts. "Our electricity grid would be overwhelmed with a complete rollout of heat pumps." Gelsenwasser will start adding hydrogen to the distribution grid in the third quarter as part of the Reallabor Linnich. The plan is to gradually increase from 10 per cent to 30 per cent. The first anchor customers from the industrial sector around Linnich could also be connected. /mt