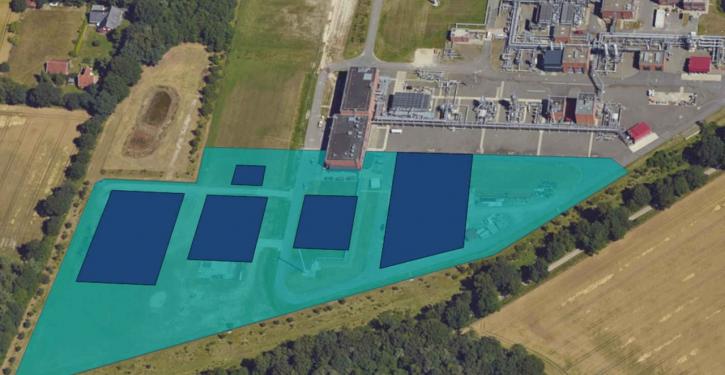 Caverns can be converted to hydrogen. (Image: RWE)
Berlin (energate) - Up to 40 new cavern storage facilities must be built in Germany to store hydrogen by 2050. These 40 new storage facilities would each consist of eight caverns with a working gas volume of almost 500 million m3. This is the result of a study led by the DBI Gas-und Umwelttechnik Institute. The total investment for the conversion and new construction of storage facilities amounts to up to 12.8 billion euros.

The necessary expansion results from the long-term scenario "TN electricity" presented by the Federal Ministry of Economics last year. In this scenario, the demand for hydrogen in 2050 is 262 TWh and the storage demand is just under 73 TWh. In the study, DBI analyses the extent to which existing natural gas storage facilities can store hydrogen. The 31 cavern storage facilities are basically capable of doing so, but the energetic storage volume drops from 162 to 31 TWh. Of the 16 pore storage facilities, presumably only four can be converted to hydrogen. Neither the authors of the study nor the representatives of the clients wanted to say which ones when the results were presented. The necessary parameters are a high temperature of around 50 degrees in the reservoir and a high salt content in the water. In principle, each pore storage facility must be considered individually, emphasised the study's director Hagen Bültemeier of the DBI.


Less demand for other scenarios


The expansion requirements and total investments are lower in the other three scenarios. In the ministry's long-term hydrogen scenario, hydrogen demand rises to 690 TWh by 2050, but seemingly paradoxically, the necessary capacity for hydrogen storage drops to 47 TWh. The reason for this: Hydrogen is used more evenly in the different use sectors. The total investment required therefore falls to just under 6 billion euros, and only 15 new cavern storage facilities are needed. For both basic scenarios, a variant was calculated in which part of the necessary hydrogen is produced by converting natural gas into hydrogen and solid carbon (methane pyrolysis). All pore storage facilities can then also continue to be used, as natural gas is stored. The investment costs drop to around eight billion euros (electricity scenario) and 1.7 billion euros (hydrogen scenario).

The study provides very detailed technical descriptions of the requirements for the conversion of natural gas storage facilities. The conversion costs are estimated in detail for one example storage facility each, pore and cavern, for an optimistic and a conservative scenario.


The study was commissioned by the associations Initiativen Energien Speichern (Ines), Bundesverband Erdgas, Erdöl und Geoenergie (BVEG) and DVGW Deutscher Verein des Gas- und Wasserfaches. For Sebastian Bleschke managing director of Ines, there are three political conclusions: Storage must be better and more concretely considered strategically in the national hydrogen strategy. In addition, a viable market framework for the conversion and construction of storage facilities must be developed. Funding instruments to support the first users are also necessary to solve the "chicken-and-egg problem". He announced that Ines would soon take a position on support mechanisms and the current support system. /hl