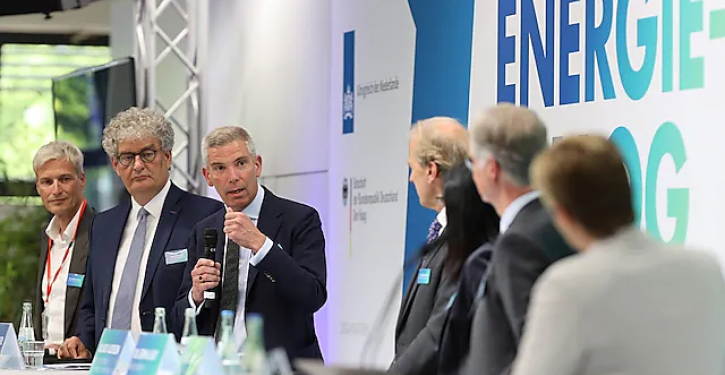 Executives discussed the when and how of the hydrogen ramp-up in Wesseling. (Image: Shell Energy and Chemicals Park Rheinlan)
Wesseling (energate) - Technically, the hydrogen ramp-up for the decarbonisation of industry is manageable, but in terms of costs it is problematic. This was the tenor of the "German-Dutch Energy Dialogue" in Wesseling, to which the Shell Group and the German-Dutch Chamber of Commerce had jointly invited. "The costs will run into the billions and will be borne by the citizens. That is the uncomfortable truth," BASF board member Jurgen Hoekstra said at the panel discussion at the refinery site near Cologne. The chemical company needs large amounts of green electricity and hydrogen for its plants in Ludwigshafen and Antwerp and, together with Vattenfall and Allianz, is investing large sums in offshore wind turbines for this purpose. Nevertheless, the board member expressed his conviction that own generation in the North Sea will be far from sufficient to cover industrial demand. Not least because a lot of energy is lost in the production of hydrogen.

Arnd Köfler of Thyssenkrupp Steel also raised the question of costs for the green conversion of his two largest steelworks in Germany, which in total could need up to 1 million tonnes of hydrogen per year. The fact that the EU did not decide to extend emissions trading to the buildings and transport sectors a few days ago was therefore a "great concern" to him. This would not make the investment decision for the first direct reduction plant, which thyssenkrupp actually wanted to make shortly, any easier.


Sopna Sury, who is responsible for hydrogen at RWE Generation, also criticised home-made hurdles with regard to Brussels. The delegated act on the Red II Directive restricts the use of green electricity for hydrogen production after a transitional period from 2026. After that, producers must ensure that only additional new renewable plants are allowed to produce hydrogen, but not existing ones (energate reported). "A green electron is a green electron, there is no good or bad," Sury emphasised. She sees the planned specifications as making it more difficult for industry to produce hydrogen in "sufficient volumes" at low cost.

Even if politicians promise faster approval procedures against the backdrop of the Ukrainian war, it would first have to be shown whether the previous procedures for offshore wind turbines of seven, eight or ten years can actually be undercut. Shell Germany boss Fabian Ziegler also sees this as one of the main problems for the rapid ramp-up of the hydrogen market. "Radical simplification would be so easy," he said in the discussion.


From the grid's point of view: great uncertainties


The many question marks surrounding production and demand make planning hydrogen transport extremely challenging, Han Fennema of Dutch gas grid operator Gasunie pointed out. He hopes to see more clearly in about a month's time which parts of the Gasunie network can be converted to hydrogen. Due to declining exports from the Gronigen gas field, the gas pipelines are getting emptier and emptier, so they are ready for conversion. Currently, the gas industry is in negotiations with the government to get compensation in case of "under-utilisation" of the future hydrogen networks. According to Fennema, "this could solve the chicken-and-egg problem."

The goal, he said, is to connect the five Dutch industrial clusters with each other and to achieve a connection to the German hydrogen grid by the end of 2026. To this end, talks are already underway with the German network operators Thyssengas, OGE and EWE. Thus, new pipelines called "Delta Corridor" could transport hydrogen from the port of Rotterdam to North Rhine-Westphalia in the future, but also dispatch CO2. The Gasunie boss described it as "fair" that the Netherlands, which sold a lot of natural gas to Germany in the past, take back CO2 and store it in its empty fields (CCS). Allard Castelein, CEO of the Port of Rotterdam, also called the corridor essential to reduce Europe's energy dependency. The Parliamentary State Secretary in the Federal Ministry of Economics, Oliver Krischer (Greens), however, did not mention the Delta Corridor in his welcoming speech, which was transmitted online. /mt