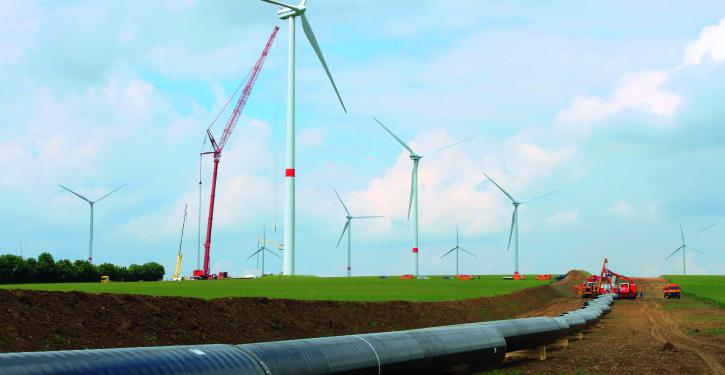 When it comes to building new hydrogen pipelines, the gas grid operator OGE sees itself facing unnecessary hurdles. (Image: Open Grid Europe GmbH)
Essen (energate) - Regulatory framework conditions stand in the way of the development of a hydrogen infrastructure in Germany. This was the complaint of Thomas Hüwener, CTO of the transmission system operator Open Grid Europe (OGE), at the Handelsblatt Hydrogen Summit 2022 in Essen. His company is therefore seeking talks with the German government. "We will approach the government to get this going," he announced.

OGE is involved in two large hydrogen projects, "GetH2" and "H2ercules", which are already well advanced, Hüwener made clear (energate reported). But when it comes to implementation, "we keep running against the barriers," OGE's managing director complained. He had learned that the ramp-up of the hydrogen economy was not a sprint, but a marathon. However, the rapid development of an LNG infrastructure in Wilhelmshaven now shows that things can be made possible in a very short time. OGE is itself responsible for the connection to the natural gas grid. In order for the floating terminal to be able to feed in as early as next winter, the grid operator wants to complete the required pipeline WAL by the end of the year (energate reported). Hüwener was optimistic at the Hydrogen Summit that this would succeed: "It's going extraordinarily well so far." The pipeline is in the accelerated approval process, he said, and archaeological investigations of the subsoil have already begun. In the construction phase, OGE wants to build with 700 people at the same time, which is about twice as many as usual, thus ensuring rapid completion.


While something is happening in Germany with regard to infrastructure projects, European regulation is unfortunately preventing a lot, Hüwener continues. There is no integrated network planning for gas and hydrogen, for example, and the independent grid operator (ITO) model, after which OGE is also set up, no longer even appears in directives. This discourages investors. In its hydrogen directive, the EU Commission allows gas network operators set up as ITOs to build up a hydrogen network, but only for a limited period until 2030, after which the companies would have to sell their hydrogen network (energate reported). Kerstin Andreae, chairwoman of the executive board of the industry association BDEW, criticised this regulation as wrong. No gas company would invest in hydrogen transformation if it had to sell its plants afterwards. She called on politicians to put this regulation aside.

Barbie Haller, new vice-president of the Federal Network Agency, also defended the ITO model. She said Brussels had always been against it, but this form of unbundling had become established in Germany. "I could imagine the Commission giving in on this point," Haller said. At the same time, she reiterated the position of the Federal Network Agency in favour of unbundling. The regulatory authority will continue to keep a critical eye on unbundling.


As far as the financing of the hydrogen network is concerned, Haller once again spoke out against joint charging for gas and hydrogen networks. "EU law does not provide for this and it would not be right to burden natural gas customers with the costs," she said. She added that it would be better to finance the development of the hydrogen network through a state subsidy, it just has to be set up properly. Now that the transit and import flows in Europe are changing as a result of the Ukraine war, there are also challenges of their own in the natural gas network that have to be overcome. Hüwener had previously criticised that the funding as a real laboratory alone was not sufficient to finance the hydrogen network. Although joint charging was not desirable, "it could still be implemented very quickly", the OGE managing director advertised.

From BDEW's point of view, the regulatory framework for hydrogen is too narrow, clarified Ms Andreae, chairwoman of BDEW's executive board. She said that it was annoying that in many cases it isn't possible to see this industry as a great opportunity. At the same time, however, she was optimistic about possible changes and spoke of positive signals from the Federal Ministry of Economics: "I perceive movement there and would not be so sceptical." /tc