Thyssenkrupp prepares the way for H2 use 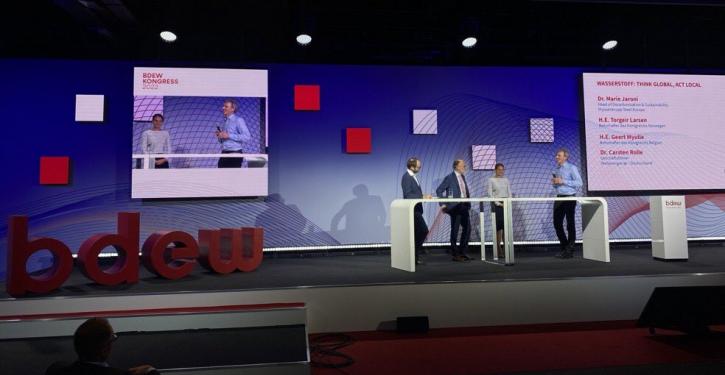 Thyssenkrupp is dependent on a rapid ramp-up of the hydrogen economy, as Marie Jaroni explained at the BDEW Congress. (Image: BDEW)
Berlin (energate) - The steel group Thyssenkrupp will make the investment decision for the first direct reduction plant this autumn. These plants initially run on the basis of natural gas and later on hydrogen, replacing the classic blast furnaces for steel production. In order for the decision for a first "small" plant to be positive, the company is dependent on state support, said Marie Jaroni, responsible for sustainability and decarbonisation at Thyssenkrupp, at the BDEW Congress. Thyssenkrupp will only conclude the contracts with the utilities if financial aid is granted. The preparations for this are already underway and the contracts could thus be signed this year, Jaroni said. The plant would have a capacity of 1.2 million tonnes. For this, the company would need 70,000 tonnes of hydrogen annually. Initially, Thyssenkrupp will still use natural gas, but hopes - also as a result of the war in Ukraine - for a faster ramp-up of the hydrogen economy. /kj