Appeal for hydrogen production at sea 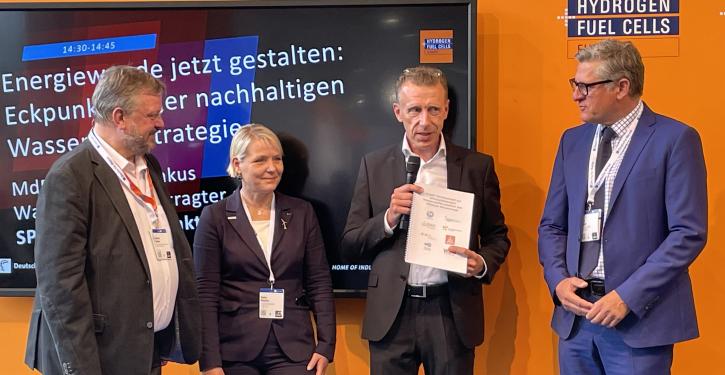 The appeal was presented and handed over at the Hannover Messe. (Image: DWV)
Hanover (energate) - In a joint appeal, eight associations and networks are campaigning for six measures as the "Offshore Wind H2 Eight". "Hydrogen production at sea in the German exclusive economic zone offers great opportunities for the expansion of electrolysis capacity for the goals of the national and European hydrogen strategy and for offshore wind energy development in Germany, if it is enabled on economic terms," the stakeholders say. The signatories of the paper include Aquaventus Förderverein; Bundesverband Windenergie Offshore; Deutscher Wasserstoff- und Brennstoffzellen-Verband; Förderverein des Clusters Erneuerbare Energien Hamburg; Netzwerkagentur Erneuerbare Energien Schleswig-Holstein; the industry union IG Metall; Stiftung Offshore-Windenergie, and the Wind-Wasserstoffverband as well as the Innovation Cluster WAB.


Among other things, they demand that the expansion target for offshore hydrogen production to 10,000 MW by 2035 be made binding in the National Hydrogen Strategy and in the Wind Energy at Sea Act (WindSeeG). The only area planned so far in the North Sea, with its potential of 300 MW, is far too small. Areas far from the coast that are suitable for offshore wind energy but for which it would be too costly to connect to the grid by 2035 would be ideal. In order to be able to produce sufficient hydrogen at competitive prices, the requirements for the purchase of electricity for electrolysis would also have to be defined as broadly as possible. The requirements of the European Union's Renewable Energy Directive (RED II) do not do justice to this, it continued. The limitation to new plants would lead to a considerable increase in costs for electrolysis as well as to the fact that significantly less green hydrogen could be produced with the same electrolyser capacity. When implementing the EU rules, the German government should therefore also consider subsidised and older RES-E plants as additional.


A hydrogen collection pipeline in the North Sea is also an approach that the eight stakeholders welcome. "According to a recent study, a pipeline offers considerable advantages over sea and land cable laying, especially for longer distances, in terms of time savings and environmental compatibility," the appeal says. With an installed generation capacity of 10,000 MW, five cable systems would be required for a comparable electrical output.

"As yet, green hydrogen is not competitive with hydrogen produced from fossil fuels. The development of a competitive market design for offshore wind hydrogen is therefore a necessary step to balance cost differences," the appeal continues. A programme to support the market ramp-up should therefore include a "sustainable funding volume" of at least 10 billion euros. It should build on the tested EU-compliant market-oriented system of the H2Global initiative and initially support at least 2,000 MW of electrolysis capacity.


Addressing the shortage of skilled workers


According to the stakeholders, it is also important to address the foreseeable shortage of skilled workers, as the shortage is also worsening in the offshore wind sector and all other areas of the energy transition. Finally, the signatory organisations advocate a "partnership between politics and business" "in order to work quickly and effectively on the necessary course-setting in a moderating and overarching manner". /df