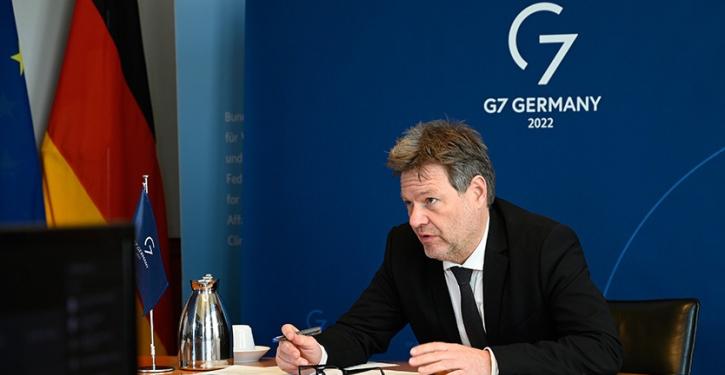 Economics Minister Habeck would have liked to see a stricter oil embargo against Russia. (Image: BMWK/Andreas Mertens)
Berlin (energate) - Federal Economics Minister Robert Habeck (Greens) has expressed his disappointment at the only partially imposed European oil embargo against Russia. He sharply criticised Hungarian head of government Viktor Orban, who had prevented a stricter import ban. After several hours of negotiations, the EU heads of state and government had agreed to impose an import ban only on Russian oil deliveries by ship. Sanctions against pipeline imports had been prevented mainly by Hungary, as the country only receives oil by pipeline (energate reported). "I am not happy about this," Minister Habeck said at a meeting of the CDU Economic Council. He spoke of a "choking" around the latest sanctions package, which had damaged the previous European unity towards Russia. The Hungarian head of government had acted "nefariously" and only for his own interests, Habeck criticised. He was thus much clearer than Chancellor Olaf Scholz (SPD), who at the start of the EU summit had called for an agreement on the oil embargo to take into account the interests of the EU states.

Whether Hungary will receive millions from Brussels for the conversion of its refineries, as demanded, is also open. The compromise could be decided on 1 June. In addition to Hungary, the Czech Republic and Slovakia may also continue to receive oil from Russia via the "Druzhba" pipeline. In case of an emergency, Hungary is to receive supplies via the Adriatic pipeline. Germany and Poland are sticking to their commitment not to use any more oil from Russia until the end of 2021. Talks are currently underway to convert the refinery in Schwedt (Brandenburg). In total, 90 per cent of Russian oil exports to the EU are thus covered by the embargo. "We will shortly be looking again at the question of the remaining 10 per cent pipeline oil," EU Commission President Ursula von der Leyen said after the negotiations. She added that this would include the question of how long the agreed exemption should be limited.


Dutch Prime Minister Mark Rutte expressed his satisfaction with the compromise: "All in all, it's fine." The Netherlands had feared that cheap pipeline oil from Russia would distort competition in the EU. Through the port of Rotterdam, 100 million tonnes of tanker oil enter the EU every year. The commodity exchanges have already reacted to the partial embargo on Russian oil with price increases. The price of Brent North Sea oil rose to 123.32 US dollars per barrel. This was an increase of 1.65 dollars compared to the previous day. US WTI oil paid up to 118.54 US dollars, an increase of 3.47 dollars. This is the highest level in two months.


No gas embargo in the 7th sanctions package


Austrian Chancellor Karl Nehammer, however, dampened expectations that a similar waiver on Russian gas could follow the decision on the oil embargo. A gas embargo would "not be an issue in the next sanctions package". This was also made clear by Chancellor Olaf Scholz at the EU summit, Nehammer said. /kw/rl