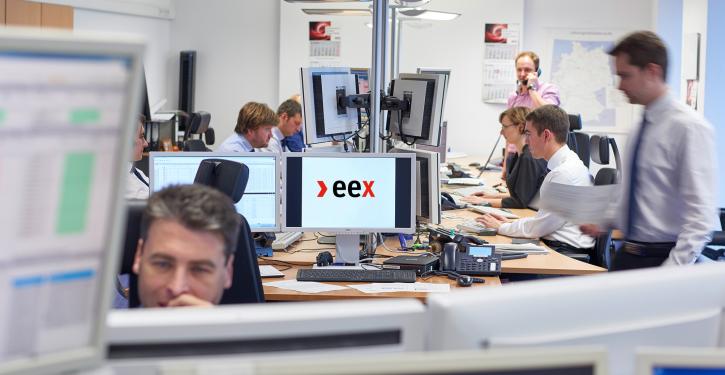 Gasterra and Ørsted would buy the missing quantities on the European gas market. (Image: EEX)
Amsterdam/Copenhagen (energate) - The Dutch gas supplier Gasterra and the Danish Ørsted Group are not responding to Russian President Vladimir Putin's demand to settle their gas imports in roubles. Russia is therefore suspending its gas deliveries. However, both countries are confident that they will be able to buy the missing gas on the European gas market. To put this into perspective, the import volumes are comparatively small compared to Germany, as is the challenge of procurement.

Via "Telegram", Gazprom announced on 31 May that gas deliveries to Gasterra had been completely stopped. The Dutch company had let the payment deadline of 30 May pass. After Ørsted had also failed to pay by 31 May, Gazprom Export announced that it would stop deliveries on 1 June. Gazprom also announced that Shell Energy Europe Ltd. had also refused to open a rouble account for a supply contract with a maximum annual volume of 1.2 billion cubic metres for delivery to Germany. Deliveries would also be suspended as of 1 June, Moscow said.

"Opening accounts under Russian law and control under the Russian government is too big a risk," Gasterra announced on 30 May. Affected by the delivery stop is a supply contract with a volume of 2 billion cubic metres of natural gas, which would have ended in four months on 1 October anyway. The Groningen-based company, a joint venture of the Dutch state (50 %) with the oil and gas companies Shell (25 %) and Exxon Mobil (25 %), had already taken precautions by buying from other gas suppliers and did not expect "serious consequences" for the highly integrated European market, it said.


In its current situation report on the supply stop for the Netherlands, the Federal Network Agency writes that a decline in gas flows in the Nord Stream 1 pipeline of about ten per cent is expected. According to the information available, the missing volumes had been destined for the Dutch market and would now be procured elsewhere.

Ørsted, based in Fredericia, is also refusing to pay into a separate rouble account that German importers have apparently been using since 20 May (energate reported). "We have no legal obligation to do so in our contract and have repeatedly told Gazprom Export that we will not do so," the group announced in a statement. Denmark will have to buy the gas volumes "to a greater extent" on the European gas market, it said. "We expect that this will be possible," Ørsted said in a statement, without quantifying the missing gas volumes in it.


In March, Ørsted had already announced that it would not be easy to get out of a 16-year-old take-or-pay contract that provides for the purchase of at least 20 billion kWh of gas (equivalent to less than 1.5 billion cubic metres) per year and runs until 2030 (energate reported). Larger companies in Denmark and Sweden are primarily affected, he said. "We have storage capacities in Denmark and Germany, among others, and are currently filling up our storage facilities to secure supplies to our customers and contribute to the security of supply of the gas market," the company said. The supply freeze does not change the earnings expectations for the current year, nor does it change the long-term financial security, Ørsted reiterated its announcement from March. If there is a net profit from the Gazprom contract this year, it will be donated to humanitarian relief efforts in Ukraine, he said.


Meanwhile, Serbia has reached an agreement with Russia on three years of continued supply at favourable conditions, according to unanimous media reports. The supply contract would have expired on 31 May. Serbian President Aleksandar Vučić recently announced after a telephone conversation with the Russian president that gas prices would continue to be calculated by a formula based on the current high market prices. However, compared to other European countries, prices would be "much more favourable". /mt/tc