Siemens scans the power grid with AI and laser 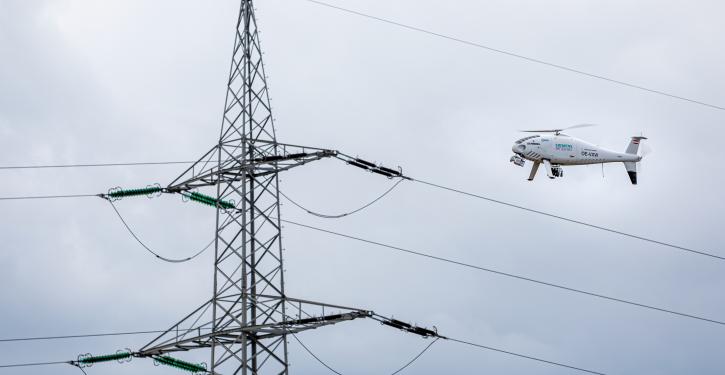 Siemens uses a helicopter and special technology to check the condition of the grids. (Image: www.siemens-energy.com)
Munich (energate) - Grid operators in Germany must regularly inspect 37,000 kilometres of high-voltage lines for damage. The grid companies Schleswig Holstein Netz and Bayernwerk Netz have now commissioned the Siemens Group to inspect 4,000 kilometres of their lines. The technology company promises fast results through artificial intelligence (AI). Siemens still uses a helicopter equipped with 19 cameras and 3D laser scan sensors for inspections. According to the company, up to 12,000 images and detailed 3D data are generated per kilometre of pipeline.

AI-based software could evaluate these images in a few hours, whereas a human would need "several days". In order to detect faults in line images, Siemens has "trained" its software with what it claims are more than two million images of European and North American lines. In this way, possible risks, such as trees growing too close, can be detected earlier, the company says. In addition, the surface temperature of the individual resources is measured, among other things. The bottom line is that this should provide an exact overview of the condition of the lines.


Drones to be used in the future


The data not only serves as a snapshot, but the software also uses it to create a so-called digital twin of the inspected equipment. The advantage is that network operators can simulate possible events in advance, such as trees falling on lines, and take countermeasures. The "SIEAERO" service was developed by Siemens Energy. The plan is to use drones instead of helicopters in the future. Several test flights have already been successful. However, the use of drones beyond one's own line of sight has been prohibited in most countries up to now. /dz