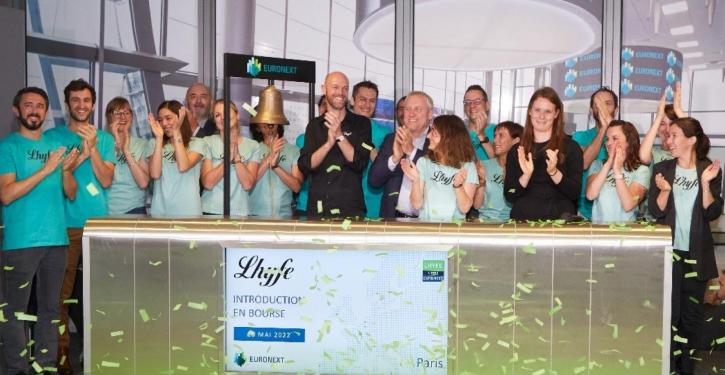 Lhyfe is now listed on Euronext in Paris. (Image: Euronext)
Cologne (energate) - The French producer of green hydrogen Lhyfe has successfully launched on Euronext in Paris. With the IPO, the company is responding to the rapidly growing demand for renewable hydrogen and the necessary development of a European hydrogen industry, Lhyfe announced. By 2030, the French company with branches in Germany, Sweden, Denmark, the Netherlands and Spain wants to build up 3,000 MW of generation capacity for green hydrogen and thus position itself as one of the main players in this field. According to the company, there are currently 93 projects with a total capacity of 4,800 MW in the commercial pipeline. Lhyfe aims to realise 55 MW by 2024 and 200 MW by the end of 2026. The latest project is a research cooperation with the Swedish company Trelleborg Energie to establish local hydrogen production with a preliminary capacity of 5 MW.

The IPO increases the company's capital by 110 million euros. "Thanks to this milestone, we now have stronger financial resources and new partners that will give a new impetus to our development and the establishment of numerous green hydrogen production sites across Europe," Luc Graré, Head of International Business at Lhyfe, said. Half of the net proceeds of the IPO will be invested in equity investments in project companies. Another 35 per cent is earmarked to strengthen business development and engineering teams. Eight per cent will go to research and development programmes and the remainder to general corporate purposes. /tc