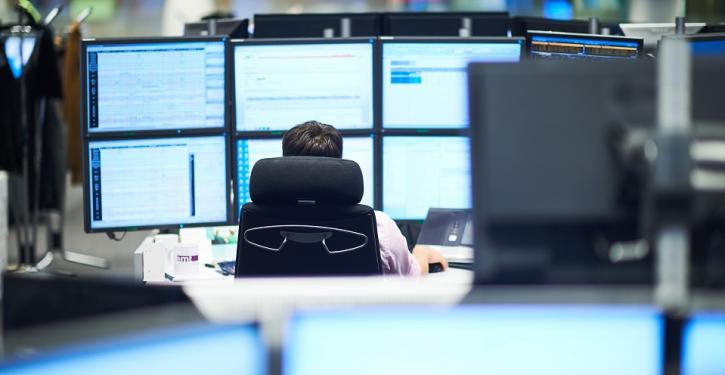 Prices on the stock market react to bad news. (Image: ENGIE Electrabel)
Leipzig/Essen (energate) - The gas industry is still cautious in its assessment of the new sanctions from Russia against Gazprom Germania. "We have taken note of the sanctions list and are currently examining the facts," a spokeswoman for the Leipzig-based importer VNG told energate. VNG procures part of its import volumes via the Gazprom Germania subsidiary WIEH, so it is likely to be directly affected by the sanctions. VNG did not provide any information on the quantities or possible procurement alternatives.

The RWE group, which as a "midstreamer" distributes gas volumes to municipal utilities and large industrial customers, was also reluctant to offer more information. "We are first looking in detail at the effects of the sanctions imposed by Russia. It is difficult to assess how well Germany can cope with a gas embargo in winter," said RWE board member Michael Müller at the presentation of the company's quarterly figures. If there is a warm winter with a lot of wind, the situation will be more relaxed in the coming winter months. But a lot also depends on how the further filling of the gas storage facilities develops and "how we make progress on the subject of LNG", Müller said.


Problem of price rather than quantity


Germany's economics minister, Robert Habeck (Greens), had previously stressed in a press conference that the now foreseeable shortfall in gas volumes of around 10 million cubic metres per day could be absorbed and replaced. Individual contracts might not be served, but the volumes could still reach Germany and Europe through new contracts and bookings. "The resulting higher prices could be the point of the whole operation," Habeck speculated. If so, he said, Germany would not have a volume problem, but rather a price problem, for which the federal government had made provisions to a certain extent.

The economics ministry refrained from declaring an alert level in the gas emergency plan because the filling of German gas storage facilities until winter was not yet in danger. "The storage facilities must be full by winter, because otherwise we will be in a situation where we are very vulnerable to blackmail," Habeck emphasised. The minister considers saving gas to be the top priority now, and the industry will certainly do so even without smart advice: "Anyone who can do the math will now limit their consumption with an eye on prices." /mt /pa