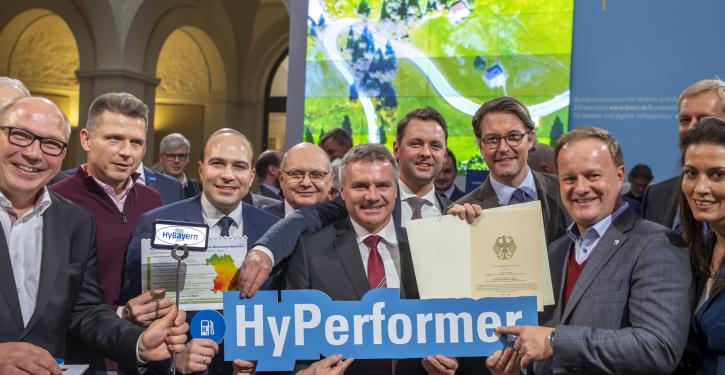 The expansion of the model region "HyBayern" is progressing. (Image: NOW GmbH)
Munich/Pfeffenhausen (energate) - The operating company Hy2B Wasserstoff is building a 5 MW electrolyser in Bavaria. In the immediate vicinity, the Hydrogen Technology Application Centre (WTAZ) is to be built in Pfeffenhausen by 2024, which is being funded by the federal and state governments with a three-digit million sum. A planned 10 MW open-space photovoltaic plant is to be directly coupled to the electrolyser. Once completed next year, the electrolyser is expected to produce around 440 tonnes of green hydrogen, the Bavarian state ministry said in a statement. "The planned 5 MW electrolyser in Pfeffenhausen is an important building block to further advance the hydrogen state of Bavaria," Bavaria's state minister Aiwanger said enthusiastically. It will be used to supply not only the adjacent user centre, but also two bus and truck filling stations in the districts of Ebersberg and Munich. This could save more than 4,500 tonnes of CO2 annually. /pf