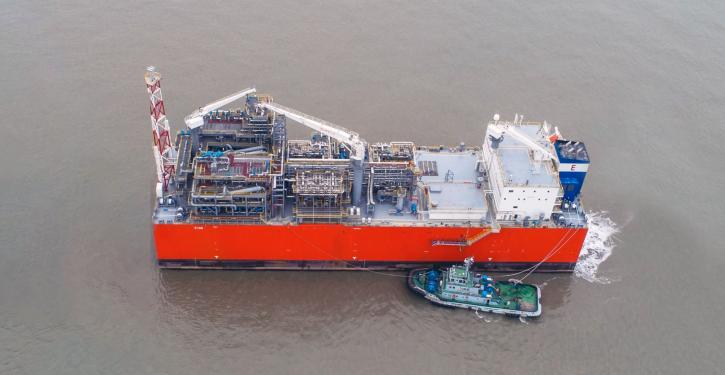 In addition to Exmar's "S188", Gasunie has chartered a second FSRU for Eemshaven. Both are scheduled to start operations in August. (Image: EemsEnergyTerminal)
Groningen (energate) - The Dutch company Gasunie has chartered a second floating LNG platform for Eemshaven. The Floating Storage Regasification Unit (FSRU) comes from the American energy infrastructure company New Fortress Energy and has been leased for five years, Gasunie announced. It is scheduled to moor in Eemshaven in August 2022. With the second FSRU, the new "EemsEnergyTerminal" will have a capacity of 8 billion cubic metres. At the end of April, Gasunie had already chartered the floating regasification unit "S188" from the Belgian company Exmar (energate reported). This FSRU is also scheduled to reach the Netherlands in August. Both units could then start operation as early as autumn and feed gas into the transport network.


A market survey on the import of liquefied natural gas has met with overwhelming interest, Gasunie says. More than 15 companies with a demand four times as high as the supply had registered. Until 10 June, these companies can now convert their registered interest into binding purchase contracts.

After the Russian attack on Ukraine, the Netherlands decided to double its LNG import capacities in the short term. Currently they are at 12 billion cubic metres per year. In addition to the new terminal in Eemshaven, the use of the existing gate terminal in Rotterdam is to be optimised in order to increase annual capacity. /tc