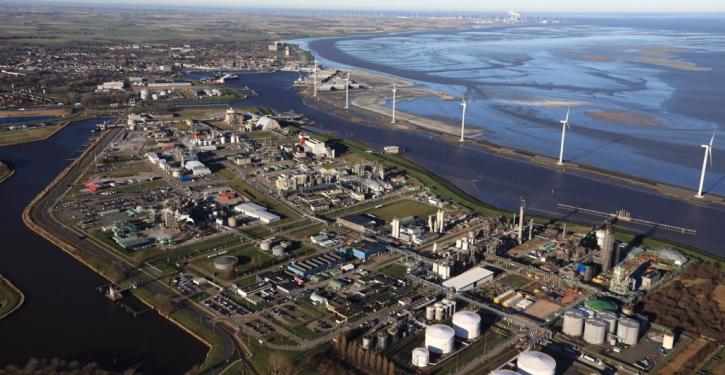 The Dutch chemical park Delfzijl in the province of Groningen is to become a hydrogen site. (Image: Groningen Seaports)
Eemshaven (energate) - A large-scale hydrogen project called "HyNetherlands" (HyNL) by Engie is picking up speed. In order to build a hydrogen hub with 1,850 MW in the north of the Netherlands over the next eight years, the French are cooperating with two partners. These are, on the one hand, the German EEW Group, which specialises in residual waste recycling, and on the other, the Dutch fertiliser producer OCI, as Engie has now announced. The Dutch gas grid operator Gasunie is also involved. The hub is to be connected to its gas distribution network in the Netherlands and Germany, which is currently being upgraded accordingly.

Three construction phases are planned for the hub. Initially, the partners want to supply hydrogen to industry in the province of Groningen, and later to international customers - primarily from Germany. According to Engie, the first step is the construction of a 100 MW electrolyser on the site of the Engie-GuD power plant in Eemshaven. This will produce "green" hydrogen from wind power, fed by 200 MW of offshore wind capacity, from 2025. "In the second phase, an additional 750 MW is planned by 2030, when transport capacity to the Ruhr area has been built," Engie said. The third phase envisages a further 1,000 MW to be realised by the end of the 2030s.


The potential customers are to be other energy-intensive industries - such as steel or glass production - as well as the mobility sector. In all of this, the companies involved are counting on the strategically favourable location of the project and hope for government subsidies. According to Engie, the latter and the necessary permits currently have the "highest priority". With the hydrogen that Engie will be able to provide after completion of the first construction phase, the fertiliser producer OCI wants to produce e-methanol. The OCI plant "BioMCN" in Farmsum will receive the hydrogen via a pipeline. OCI also wants to purchase hydrogen from RWE for this plant. A corresponding agreement has been in place since the end of 2020 (energate reported). Furthermore, the partners want to integrate a CCS plant into the hub. This will be built on the site of an EEW waste-to-energy plant in Farmsum, 20 kilometres away, they added. /pa