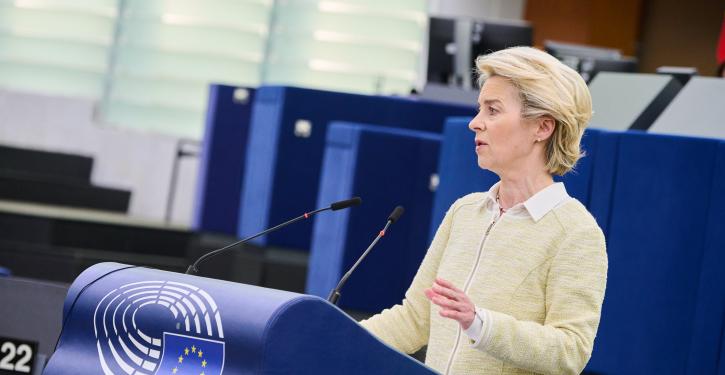 "We will make sure that we say goodbye to Russian oil in an orderly manner," EU Commission President Ursula von der Leyen said. (Image: European Union, 2022 / Dati Bendo)
Strasbourg (energate) - EU Commission President Ursula von der Leyen has announced a sixth sanctions package against Russia before the EU Parliament. This also includes an oil import embargo. Accordingly, Russian crude oil deliveries are to be phased out within six months and the import of refined products by the end of the year. She did not give details, such as planned exceptions for Hungary and Slovakia, which do not want to participate in an oil embargo. The EU Commission will publish the sanctions package only after it has negotiated it with the permanent ambassadors in Brussels. Negotiations are starting now.

"In the last sanctions package, we started with coal," von der Leyen said. "Now it's about our independence from Russian oil. Let's not fool ourselves: This will not be easy. Some member states depend significantly on Russian oil. But we have to work on it." An EU oil import embargo would hurt Russia more than a gas import embargo, she stated. Russia earns four times as much from its oil exports to the EU as from its gas exports there. According to the EU Commission, the EU's bill for Russian oil was around 80 billion euros and that for natural gas 20 billion euros in 2021.


The oil embargo is to be designed to avoid collateral damage and unintended compensatory effects. The latter were composed of Russian revenues not falling or even rising due to the supply shortage caused by the oil embargo and the resulting higher oil prices. "We will ensure that we say goodbye to Russian oil in an orderly manner, that is, in a way that allows us and our partners to secure alternative supply routes and minimises the impact on global markets," von der Leyen said.

Most of the parliamentary group representatives welcomed the plan. So did the Federation of German Industries (BDI). "German industry supports this step," BDI President Siegfried Russwurm said. Russian oil could be replaced on the world market in the short term, however, with additional costs and logistical challenges. The transition periods proposed by the EU Commission are the right way forward, Russwurm continued. In view of the oil embargo, energy prices will probably continue to rise. /rl/ck