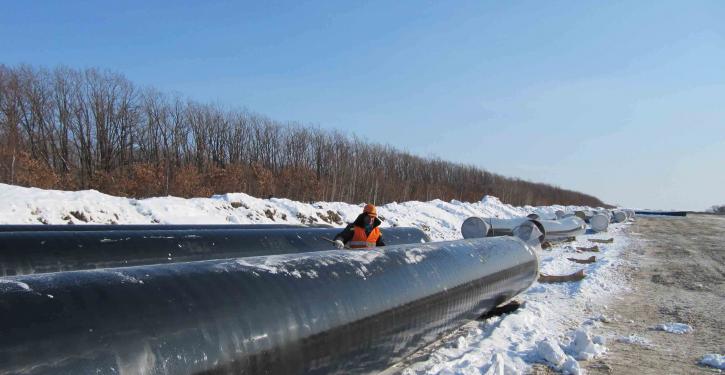 Gazprom's gas imports to Europe in the first four months of 2022 were below the previous year's level. (Image: Gazprom)
Moscow (energate) - The Russian energy company Gazprom delivered significantly less natural gas to Europe in the first four months of this year than in the same period last year. According to Gazprom, imports amounted to 50.1 billion cubic metres, a decline of 18.4 billion cubic metres or 26.9 per cent compared to imports between January and April 2021. In contrast, there was a significant increase in deliveries to China. As part of the contract between Gazprom and the Chinese national oil company CNPC, 60 per cent more natural gas flowed through the "Power of Siberia" pipeline than in the previous year, Gazprom announced via "Telegram".

Despite the increase in exports to Asia, the overall figures are declining. Compared to the same period last year, the absolute production volume fell by 2.5 per cent (4.5 billion cubic metres). Gazprom had stopped exports to Poland and Bulgaria despite existing supply contracts, and the Baltic states have in turn announced a delivery stop. In response to Russia's attack on Ukraine, Germany also wants to completely stop Russian gas imports - but not until 2024.


With reference to the statistics of the European storage operators GIE, Gazprom warned of a low level of European gas storage. Currently, only about 6.9 billion cubic metres are stored, but about 56 billion cubic metres are needed. In view of the technical restrictions on daily storage volumes, filling the gas storage facilities is "a serious challenge", it said. Only recently, the European association of transmission system operators Entsog warned that a complete halt of gas transports from Russia would significantly complicate the upcoming storage filling (energate reported). /at