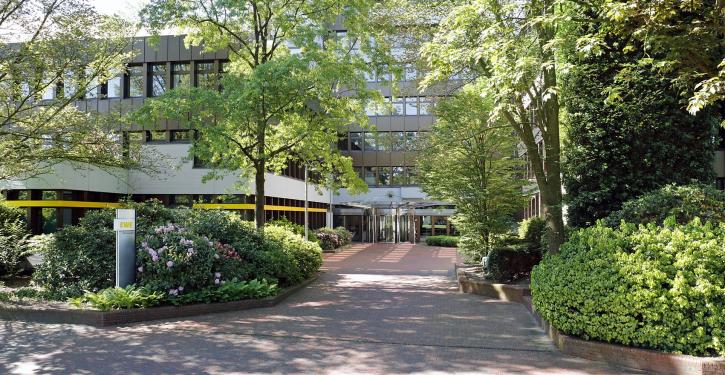 EWE sees itself facing in a challenging 2022. (Image: EWE AG)
Oldenburg (energate) - Russia's war against Ukraine has also massively changed the daily work routine at EWE. Since the start of the war, the Oldenburg-based regional utility has maintained a crisis team on the topic of supply security. Although EWE does not have any direct gas supply contracts with Russia, the group would be "indirectly massively affected" by an extension of the Russian gas supply freeze to Germany. This was made clear by the group's CEO Stefan Dohler at the presentation of the latest annual report. In view of the current situation, EWE is prepared to keep the last coal-fired power plant unit of its Bremen subsidiary SWB in operation "two to four years" longer than previously planned, he clarified. "We should not simply give away the opportunity to safely generate electricity there with imported coal," Dohler expressed concern.

So far, EWE has targeted the decommissioning of the SWB.coal-fired power plant for 2023. "That is over-planning," said Dohler. The prospects for the 150 MW reactor depend on further developments, he stressed. Whether the plant would be transferred to the capacity reserve of the Federal Network Agency beyond next year or actively marketed by EWE is an open question. Regardless, EWE intends to achieve its long-term decarbonisation target even if coal is phased out at a later date. "The targets will then not be achieved at the short end for the time being. But we will manage to achieve climate neutrality for EWE by 2035, of that we are convinced," said the CEO.


EWE is an important gas storage operator in Germany. Currently, the three EWE storage facilities for northern and eastern Germany are 36 per cent full, according to Dohler. "That is above the national average." Thanks to the milder weather in the meantime and despite the exorbitant prices in gas futures trading, fortunately more is currently being stored than withdrawn from all gas supply channels, he told energate "This is the right thing to do and the consensus in the industry in view of the current situation and Russia's irrational actions." In this respect, Dohler said, the recently adopted requirement for minimum filling levels in the new Gas Storage Act was also "explicitly to be welcomed". "Let's fill the storage facilities as quickly as possible!" In order to meet the legal requirements that will apply from May, EWE is currently revising the contracts with the users of its storage facilities, Dohler revealed.


The LNG terminals for the delivery of liquefied natural gas, which are now planned in Germany after all, are supposed to be a way out of the dependence on Russian gas. EWE also has a role to play here, as Dohler stated. Accordingly, the regional supplier is currently in the process of connecting its gas distribution network to the terminal in Wilhelmshaven, where floating terminals are to be used in the short term. "Importing extremely expensive LNG on a large scale in the long term cannot be the solution. That is clear to all of us," he stressed at the same time. Dohler sees such a more long-term solution in accelerating the regional heat transition. For this reason, he said, EWE will push ahead with the conversion of the region's heating system. This is to be achieved by EWE offering systems based on heat pumps instead of natural gas connections in newly built areas. In addition, other structures related to the hydrogen economy and renewable energies are to be established or further expanded.


Wind power subsidiary Arrentic not yet a profit driver


In the latter, EWE has been focusing on onshore wind power since its joint venture with the Alois Wobben Foundation. According to CFO Wolfgang Mücher, 30 per cent of EWE's fixed capital is invested in the company. So far, however, the contribution of the new subsidiary Arrentic to the group's overall result has been manageable - partly because of weak wind conditions, as Mücher explained. "That will change in 2022," he said confidently for the current year. EWE is also feeling pressure with regard to the current financial year because of the energy price crisis, which is being further fuelled by the war. Due to the gas price development, EWE will be forced to raise its tariffs, announced the group's management board member Dohler.


Dividend to fall by 55 per cent


EWE ended the last financial year with a drop in profits. In addition to the energy price crisis, which reached an initial peak in the second half of 2021, coping with the consequences of the pandemic played a central role for EWE. Profits in the operating business fell by around 20 per cent to 355 million euros. At the same time, sales climbed by 8.5 per cent to 6.1 billion euros. The main reason for the drop in profits was the fact that EWE preferred to keep gas in its storage facilities rather than sell it on the stock exchange. Overall, 2021 was a solid year for EWE, the management said. Nevertheless, the EWE Board of Management wants to cut the dividend for 2021 by 55 per cent to 84 million euros in order to make risk provisions, Dohler explained. /pa