Russia's gas supply freeze has so far come to nothing 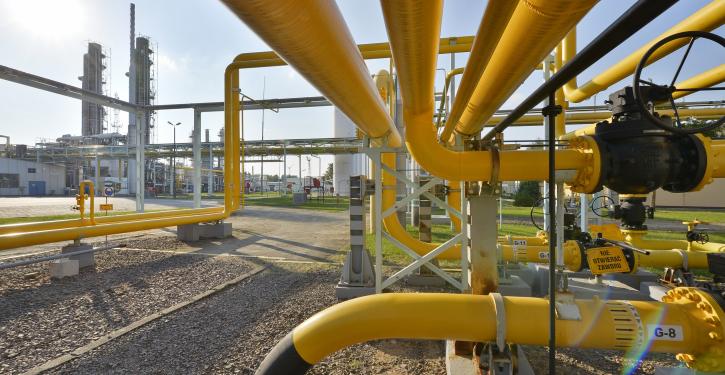 Poland has braced itself for an end to Russian gas supplies by the end of the year. (Image: PGNiG SA)
Moscow/Brussels/Berlin (energate) - The Russian energy company Gazprom has stopped its gas deliveries to Poland and Bulgaria. The company made the announcement via "Telegram" on 27 April, after the Polish gas supplier PGNiG had already reported a halt to Russian gas deliveries the previous day. EU Commission President Ursula von der Leyen called Gazprom's announcement another attempt by Russia to blackmail Europe with gas. "We are prepared for this scenario," von der Leyen wrote on "Twitter". Poland and Bulgaria will receive natural gas from their neighbours in the future, she said after a meeting of the European Gas Coordination Group. The German side also emphasised European cohesion: "The supply situation here is stable and we are doing everything we can to ensure that it remains so," said Federal Economics Minister Robert Habeck (Greens). Europe will stand together in solidarity and further diversify the gas supply. The goal in the European Union is to become independent of Russian energy imports as quickly as possible. However, the current situation would be monitored very closely.

The announcement from Moscow has no consequences for the natural gas supply situation in Germany. This was also emphasised by Stefan Rolle, Head of the Gas Division at the Federal Ministry of Economics and Technology, at the 6th Market Area Conversion Forum of the Federal Network Agency. "The situation is calm so far," Rolle said with regard to the natural gas flows. Both Nord Stream 1 and the Ukraine transit continue to be served normally, he elaborated. However, the threatened gas supply stop for Poland and Bulgaria had "not passed without a trace" on the market and had caused more uncertainty.


This has also been reflected in the gas price. On 26 April at 5 p.m., for example, the first reaction on the TTF was that the May contract shot up from just under 90 to over 108 euros/MWh. The closing price of 99 euros/MWh was then 6.50 euros higher than the previous day. On 27 May, the front month opened at 118 euros/MWh, but fell back to around 106 euros/MWh in the course of the day. There is hope in the market that this is more sabre rattling towards smaller, less significant customers, rather than a signal of what will happen when the bills of the large Western European gas customers come due.

According to the Federal Ministry of Economics, German companies pay their bills to Gazprombank in euros. Germany was thus following the guidelines of the European Commission. Von der Leyen explicitly warned energy companies against paying Russian gas supplies in roubles: "Paying in roubles, unless contractually provided for, is a violation of EU sanctions. If they do that, it's a risk for them." Ten energy companies are reportedly considering paying their gas bills in roubles, and four have already done so.


By decree, Russian President Vladimir Putin had ordered at the end of March that Russian gas deliveries were to be paid for in roubles from 1 April. In a subsequent statement, Russia said that companies could continue to pay in euros or US dollars according to their contracts. However, they would have to open a new account at Gazprombank, which is not affected by Western sanctions. The bank would then use the money to procure roubles on the foreign exchange market and pay for the gas deliveries. In this way, Russia is trying to stabilise its currency.

According to Gazprom, no payments from PGNiG and Bulgaria's Bulgargaz had been received in the newly specified accounts by 26 April, although "the counterparties" were informed of the new modalities in good time. The company followed up the delivery stop with a warning: if the transit countries illegally diverted the gas volumes for their own purposes, Russia would reduce the transits by these volumes. In the recent past, however, hardly any natural gas came from Russia through the Yamal pipeline to the German-Polish transfer point at Mallnow.


Both Poland and Bulgaria confirmed the halt in Russian gas deliveries. Both countries had refused to pay for Russian gas supplies with roubles. "With the proposed two-step procedure, we would lose control over the payments," Bulgarian Economy and Energy Minister Alexander Nikolov said. Poland's PGNiG stressed that it paid its bills in accordance with the contract and accused Gazprom of breaching long-term supply contracts. Bulgaria also accuses Gazprom of breach of contract.

At the same time, both countries signalled that security of supply was assured despite the delivery stop. Poland has not renewed its contracts with Gazprom and is preparing for the end of Russian gas deliveries at the end of 2022 anyway. The volumes will be compensated via the LNG terminal in Swinoujscie and the Baltic Pipe, which is to deliver gas from Norway from autumn. In addition, Poland wants to use a floating LNG terminal (FSRU) in Gdansk . The gas storage facilities are currently 79 per cent full and gas could also flow to Poland from the west via Germany and the Czech Republic, PGNiG said.

Bulgaria's economy minister assured that the supply of natural gas was secured for "at least one month in advance". There is no need to limit consumption, he said. "Of course, in the current war situation in Ukraine, natural gas is being used by Russia as a political and economic weapon," Nikolov said, adding that he would not hold talks under pressure. Bulgaria depends on Russian gas supplies for about 90 percent of its energy needs. However, the country with its 6.5 million inhabitants only needs about three billion cubic metres of natural gas per year, according to Eurostat. Bulgaria could cover part of its gas consumption from Azerbaijan in the future. To this end, the country hopes for a quick completion of the interconnector Greece-Bulgaria before the end of this year. /tc/am/hl/ml/sd/rl