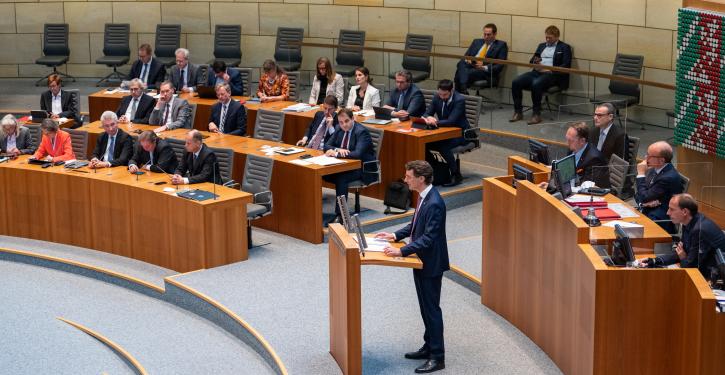 On 15 May, more than 13 million people in North Rhine-Westphalia will be called upon to elect a new state parliament. (Image: Land NRW/Mark Hermenau)
Düsseldorf (energate) - On 15 May 2022, a new state parliament will be elected in North Rhine-Westphalia. The future climate and energy policy in the "energy state" of NRW will also be at stake. The energate election check provides orientation. After all, Russia's war of aggression against Ukraine has made it clear that the energy transformation must pick up speed, especially in the Rhine and Ruhr regions. North Rhine-Westphalia is one of the strongest industrial regions in Europe. An energy embargo would hit the economy in NRW hard. But the most populous federal state also has a special responsibility in climate protection, as the flood disaster in the summer of 2021 recently showed.

But where do the parties stand on phasing out coal, expanding wind energy or using hydrogen? Which party's energy policy concept comes closest to your ideas? To help you decide, the energate editorial team has compared the positions of the five largest parties and developed an energy election check, as it did for the Bundestag elections. Based on your answers to 15 questions, the tool calculates which party you agree with in terms of content.

From Tuesday, 26 April, interested parties can get ideas for their election decision on 15 May at www.energate-wahlcheck.de. The use of the energate election check is, of course, anonymous and free of charge. Please mind that the tool is available in German only. /ck