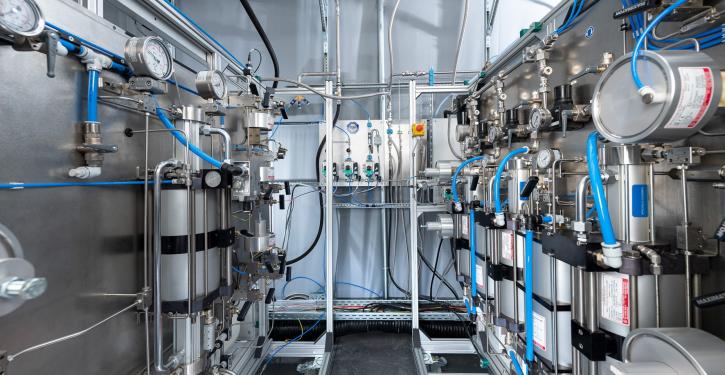 Bavaria wants to become climate-neutral by 2040. It needs hydrogen to do so. (Image: Tüv Süd)
Berlin (energate) - The demand for hydrogen in Bavaria will double by 2030 and could even increase more than tenfold by 2040. This is the result of a roadmap by the Hydrogen Centre Bavaria (H2B). The roadmap is related to the efforts of the Bavarian "free state" to become climate-neutral by 2040. The state government had already presented a hydrogen strategy in 2020 (energate reported), which is specified in greater detail in the roasmap. According to the authors, the demand for hydrogen and derived products in Bavaria - for example for mobility, electricity, heat, and industrial plants such as refineries - will increase faster than in other federal states. The reason: the climate targets of the state government of the CSU and the Free Voters party.

The roadmap predicts a demand of up to 75 billion kWh in 2040 for Bavaria, compared to 5 billion kWh today, of which the state will have to import a large part. The authors therefore urge a rapid connection to the planned EU hydrogen grid. This should take place by 2030 and not in 2035 as planned. "The Hydrogen Roadmap Bavaria points out important milestones, which are rather a lower limit for the necessary pace of the ramp-up of the hydrogen economy," said the economic expert and co-chair of the H2B, Veronika Grimm.


With regard to the generation capacities for hydrogen in Bavaria, the roadmap considers a capacity of 300 MW to be necessary by 2025, and 1,000 MW by 2030. However, this figure could rise if the connection to EU hydrogen grids is delayed. The roadmap also names concrete targets for the transport sector, such as 500 hydrogen buses in local transport by 2025 and 500 hydrogen trucks. A network of hydrogen filling stations is also to be established by the middle of the decade. The authors also anticipate widespread use of hydrogen to provide process heat in industry. "Due to the Russian war of aggression on Ukraine, we have to make even more speed to convert our economy and transport to hydrogen," emphasised Bavarian Minister of Economic Affairs, Hubert Aiwanger (Free Voters). /kw