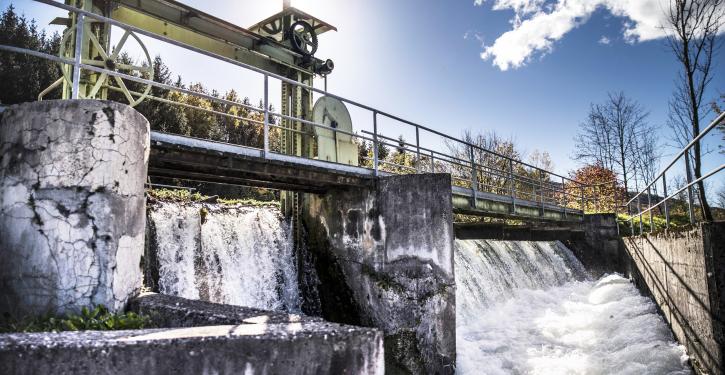 The industry is up in arms about the proposals in the amendment to the Renewable Energy Act (EEG) to abolish small hydropower plants' entitlement to remuneration. (Image: EVN/Daniela Matejschek)
Berlin (energate) - The Federal Ministry of Economics' plans for hydropower laid down in the EEG amendment are being met with increasing resistance in the industry. The German Association of Energy and Water Industries (BDEW) also opposes the plan to cancel the EEG compensation for the construction and upgrading of small hydropower plants with a capacity of up to 500 kW. It is inexplicable "why the federal government no longer wants to promote small hydropower for reasons of water ecology", explained Kerstin Andreae, chairwoman of BDEW's executive board. She referred to the Water Resources Act and the water laws at the state level, which ensured "sufficient protection for waters".


The cabinet draft of the EEG amendment stipulates that from next year hydropower plants with a capacity of up to 500 kW will no longer be entitled to subsidies. The entitlement to subsidies is also to be dropped for the modernisation of existing plants. In response, industry representatives warned of the end of small hydropower in Germany (energate reported). The North Rhine-Westphalian Renewable Energy Association (LEE NRW) expressed similar sentiments, seeing the existence of 380 affected plants threatened in NRW alone. LEE-NRW's chairman Reiner Priggen voiced his incomprehension: "This completely unexpected reorientation of hydropower promotion does not fit at all into the time when every renewable kilowatt hour counts to reduce import dependency in the energy sector."

The LEE also pointed out that many barrages in flowing waters perform important functions for flood protection and water regulation. Hydropower plants at these locations therefore tap the energy potential that is available anyway, while fish ladders can also ensure fish passage. Instead of a subsidy freeze, the association therefore calls for "noticeable financial incentives" for the modernisation of existing plants and the construction of new ones.


Meanwhile, the BDEW underpins its position with a position paper that it has drawn up together with the VDMA mechanical engineering association. In the paper, the associations emphasise in particular the systemic relevance of hydropower plants, which secure the stability of the electricity grids, for example, as a momentary reserve. They pay particular attention to pumped storage power plants and their great importance for the electricity system - for example due to system services such as balancing power. Here they consider an expansion of nationwide capacities of 4,000 to 8,000 MW possible. In order to be able to exploit this potential, they call for a fundamental exemption of temporarily stored energy from end-consumer levies as well as an acceleration of licensing procedures. /rb