Denmark frees itself from Russian gas 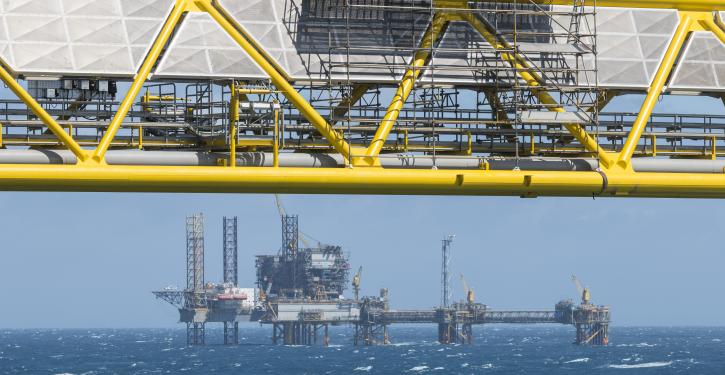 Existing platforms are to temporarily produce more gas. (Image: Maersk Oil)
Copenhagen (energate) - In order to gain independence from Russian gas supplies, the Danish government wants to accelerate the energy transition. To this end, it has presented the "Denmark can do more 2" programme, which includes higher renewable energy targets, a "turbo" for district heating expansion, additional offshore wind power and the construction of new energy islands. For a transitional period, however, natural gas production in the North Sea, which Denmark actually wanted to stop, is also to be increased.


"We want to supply Europe with green energy and displace Russian gas. That is why we propose to quadruple onshore renewable energy production and prepare for more energy islands," said Dan Jørgensen, Danish Minister for Climate, Energy and Supply. Off the coast of Jutland, Denmark is already planning to build an artificial island that will act as an "energy hub" across national borders to enable a European connection of offshore wind farms (energate reported). The construction of further islands in the North Sea is now to be prepared, it is said. The Danish government estimates the offshore wind potential in the Danish part of the North Sea at 35,000 MW.


In order to gradually force Russian natural gas out of the market, the Social Democratic minority government of Prime Minister Mette Frederiksen wants to massively expand district heating by 2028. Around 400,000 households in Denmark are still dependent on fossil fuels. The programme states that 30 to 50 percent of these could be supplied via the district heating network. Where this is not possible, heat pumps are to be used. That would be another 20 percent. Before the end of this year, all households will receive a letter from the government informing them whether and when a connection to the heating network is possible. Alternatively, they will be informed about the installation of a heat pump and offers of advice and financial support. For the replacement of old oil and gas heating systems, the government is providing funds to the tune of 3 billion Danish kroner (about 403 million euros).


The gas consumption that cannot be saved through these measures is to be completely converted to green gas by 2030. This applies above all to industrial demand. To reduce Europe's dependence on Russian gas, the government is also considering temporarily increasing its own gas production in the North Sea. In dialogue with the relevant actors, the government will explore the corresponding possibilities, it says. This would only involve fields for which licences already exist. New production projects are not to be initiated. "We are convinced that it is better to produce gas in the North Sea than to buy it from Vladimir Putin," says Prime Minister Frederiksen. In the short term, an increase of an estimated 25 per cent is possible, she said. This could make Denmark independent of Russian gas next year. /tc