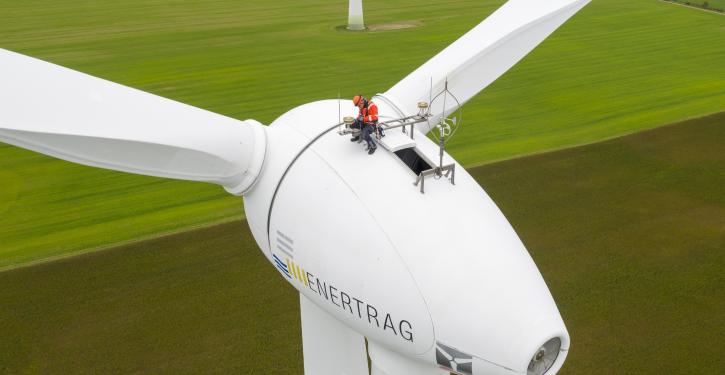 There is currently a malfunction at 5,800 Enercon turbines with a total output of 11,000 MW. (Image: Enertrag SE)
Aurich/Oldenburg (energate) - Currently, operators of a total of 5,800 wind turbines from the manufacturer Enercon cannot monitor and control their turbines remotely. This has affected turbines in Central Europe with a total output of 11,000 MW since 24 March, Enercon announced. These turbines normally communicate via a platform that runs over the satellite network "Ka-Sat". For this reason, not all Enercon turbines are affected. Because "predominantly" the communication of the Enercon wind turbines runs via a broadband connection or the radio network. Only at locations where there is no or insufficient connection does the company rely on satellite communication.

The disruption is "an annoying situation", a spokesperson for the company told energate. However, there is no danger to the safety of the systems. They run in automatic mode and regulate themselves independently. In case of malfunctions, they switch off automatically, the Enercon spokesperson said. However, the service effort increases. Normally, operators can simply radio the turbines to restart them. Currently, however, this has to be done manually by service personnel. The operators also no longer have access to information about the operating status, which sensors on the turbines normally measure. To check error messages, a maintenance team currently has to be on site every time.


Grid operators do not notice any effects


The cause of the satellite malfunction is still unclear. Media reports had previously linked the failure of the turbines to the Russian attack on Ukraine. Enercon is in close contact with the German Federal Office for Information Security (BSI), as power generation is part of the critical infrastructure, the company said. Various grid operators from the windy regions of northern Germany reported no abnormalities when asked by energate. "In the grid control centre, we cannot currently detect any faults in connection with the control of wind turbines", a spokesperson for EWE Netz said, for example. The Eon subsidiary Hansewerk also has no indication of any restrictions. Enercon is currently examining alternatives together with the operators in order to be able to control the turbines remotely again. Depending on the location and duration of the disruption, communication could, for example, take place via the LTE network. /kj