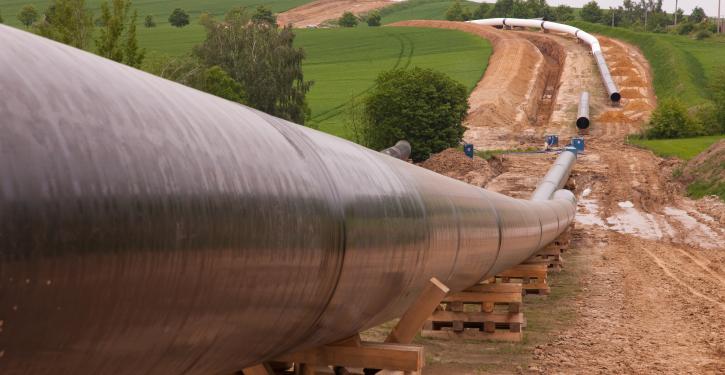 The Saxon Higher Administrative Court sees no problem in the fact that the Opal pipeline crosses a wind farm. (Image: Wingas)
Dresden (energate) - The Saxon Higher Administrative Court has dismissed four lawsuits against the Opal natural gas pipeline. These were directed against a 45-kilometre section of the Baltic Sea pipeline link (Opal) in Dörnthal, Saxony. Several owners of plots of land located in the Dörnthal/Voigtsdorf wind farm and the wind farm's operating company had filed the lawsuits. They justified their lawsuits, among other things, with the danger posed to the pipeline by parts of the wind turbines that might fall down. The complaints were not directed against the pipeline itself, but against the planning approval decision of the then Chemnitz Regional Directorate, with which it had approved the construction and operation of the Opal in the section from Großenhain to Olbernhau.


The 4th Senate of the Saxon Higher Administrative Court has now dismissed the complaints in its judgements of 12 January (4C 19/09, 4C 20/09, 4C 21/09 and 4C 22/09). The court justified its decision by stating that the zoning decision was not significantly flawed. In particular, it was not objectionable that the Opal runs through the wind farm. The probability of falling parts of wind turbines damaging the gas pipeline was extremely low. In addition, there is no danger of gas being blown out of the shut-off station built in the wind farm. Therefore, the required technical safety was guaranteed, the court said.

The priority of wind energy use over other uses established for the area was also respected. It is true that Opal may lead to disadvantages in the operation or renewal of the wind turbines. However, these would only have a minor impact on the economic operation of the wind turbines and would generally allow repowering. The judgements are not yet legally binding. The plaintiffs can appeal against the non-admission of the appeal within one month. The time limit begins after delivery of the complete, reasoned judgements, which are not yet available.


Pipeline in operation since 2011


Opal connects the Nord Stream 1 Baltic Sea pipeline to the European natural gas pipeline network. With a total length of 470 kilometres, it runs from Lubmin near Greifswald through the federal states of Mecklenburg-Western Pomerania, Brandenburg and Saxony to the city of Olbernhau. The pipeline with a transport capacity of 36 billion cubic metres per year has been in operation since 2011 (energate reported). Because the plaintiffs' urgent applications were unsuccessful at the time, they had no suspensive effect on the construction permit. The pipeline was built by Wingas at the time. It is now operated by Opal Gastransport, a subsidiary of Wiga Transport Beteiligungsgesellschaft, a joint venture between Wintershall Dea and Gazprom. /ml