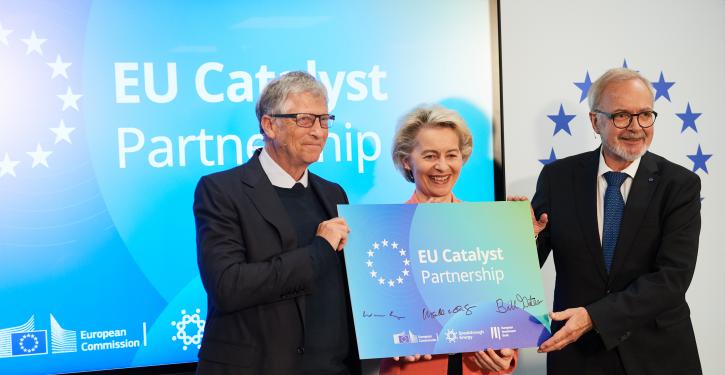 Bill Gates, Ursula von der Leyen and EIB President Werner Hoyer presented the partnership at COP26 in Glasgow. (Image: Europäische Union)
Brussels (energate) - EU Commission President Ursula von der Leyen and Microsoft founder Bill Gates want to accelerate the market introduction of innovative technologies in a partnership. As of now, proposals for large-scale, green technology projects can be submitted within the framework of the "Breakthrough Energy Catalyst" programme, the EU Commission announced. Among the areas to be funded is "clean hydrogen". The partnership was launched by von der Leyen and Gates at COP26 in Glasgow. The aim is to mobilise around 820 million euros (1 billion US dollars) between 2022 and 2026. The money is to be used to promote technologies that contribute to the realisation of the European Green Deal. The EU is making funds available for this from the Horizon Europe research programme and the Innovation Fund managed by Invest EU. It is expected that every euro of public funding will mobilise three euros of private money, the EU Commission said. /tc