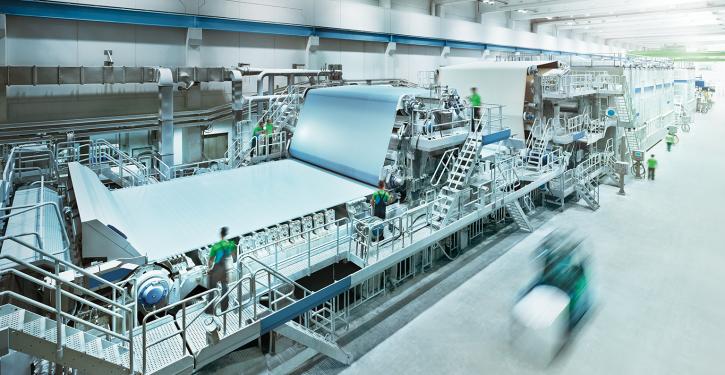 Industrial customers have to dig deeper into their pockets for their electricity. (Image: Delfort/Austropapier)
Hanover (energate) - The electricity price for large customers has risen massively within a year - by almost a third. This is shown in the current electricity price comparison of the Federal Association of Energy Consumers (VEA) as of 1 January, which covers a considerable part of Germany with 50 grid areas. Currently, the industrial electricity price averages 21.17 cents/kWh, an increase of 30.6 per cent compared to January 2021. "Such a sharp rise in wholesale electricity prices is a real price shock for many companies in Germany," Volker Stuke, chief executive officer of the VEA, assesses the development.


Higher prices in all grid areas


Prices have risen in all grid areas in Germany. According to the VEA evaluation, the largest percentage price increases were at E-netz Südhessen, based in Darmstadt (34.7%), Energienetze Mittelrhein (34.5%), Enervie Vernetzt, based in Lüdenscheid (34.5%) and Stromnetz Hamburg (34%). The smallest price increases were observed at Energieversorgung Halle Netz (26 %), Netz Leipzig (27.4 %) and Schleswig-Holstein Netz, based in Quickborn (27.4 %). "In our estimation, under these conditions it is becoming increasingly difficult especially for those companies in Germany that have not been able to secure a favourable electricity tariff in the long term, to be able to produce competitively," says Stuke.


The different electricity costs are not only reducing international competitiveness, but also becoming a problem within Germany. For example, the difference between the cheapest network area of the Kiel municipal utility (18.87 cents/kWh) and the most expensive network area of Wemag (23.41 cents/kWh) is 4.54 cents per kWh or 24 percent. In addition, electricity prices in the new federal states continue to be higher than in the old ones. The average electricity price in the new federal states, for example, is 21.56 cents/kWh, which is 0.49 cents/kWh or 2.3 per cent higher than the average price in the old federal states (21.07 cents/kWh), according to the VEA. "In order not to endanger the economic viability of our companies even further, we now expect the greatest possible sensitivity and restraint from politicians with regard to additional financial burdens," Stuke appeals. Renewed tax increases or further bureaucratic hurdles would be a "completely wrong signal" in this situation. /ml