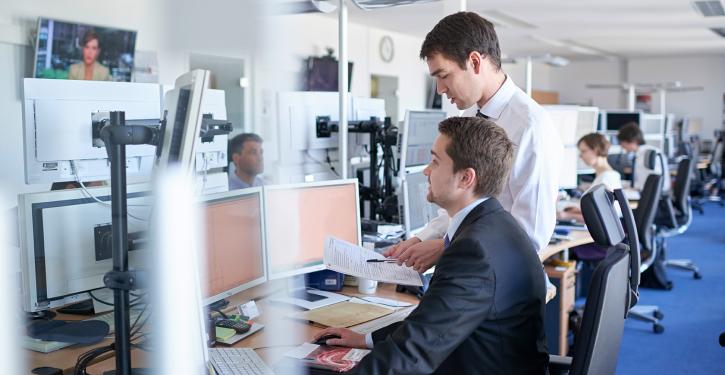 After the fixed prices, trading is to start from 2026 - but with a predefined price corridor. (Image: EEX)
Leipzig (energate) - With a final spurt, the expectations regarding sales revenues in national emissions trading have been fulfilled after all. As the data from the responsible exchange EEX shows, certificate sales generated a total of 7.18 billion euros in the first year. In its planning data for the first trading year 2021, the German Emissions Trading Authority had estimated revenues of 7.2 billion euros. At the beginning of December, however, these were still only 4 billion euros. Jürgen Landgrebe, Head of the Emissions Trading Authority, had therefore pinned his hopes on the last four auction dates in 2021 (energate reported).

And rightly so, as a look at the EEX turnover figures shows. On 7 and 9 December alone, the exchange sold 45 million and 48 million certificates, respectively, which brought in 1.2 billion and 1.1 billion euros at the legally fixed price of 25 euros per tonne of CO2. With the help of the proceeds, the federal government wants to make the price increases for oil and gas heating owners or car drivers socially acceptable and, among other things, lower the EEG levy.

National emissions trading officially started on 1 January 2021, but companies could only purchase certificates from October. In the first year, a total of 524 sellers appeared on the Leipzig exchange, including intermediaries. The companies buy certificates on behalf of municipal utilities, gas suppliers or petrol station operators. Currently, 30 such service providers are listed on the EEX. Most of the buyers (58) were active on 14 December; in the first trading weeks in October the number was significantly lower with one to six companies. The number of trades totalled 1,673 in 2021.


On 11 January, CO2 trading will continue in the new year - at the now higher price of 30 euros per certificate. However, the so-called distributors may still buy ten per cent of their requirements at the old price of 25 euros. The Federal Environment Agency had transferred responsibility for trading to the EEX after a call for tenders on 15 March. For the time being, the mandate refers to the fixed price phase up to and including 2025, whereby the price will increase year by year to 55 euros at last. Although the Greens had called for a higher price level, the new federal government has so far stuck to the existing price path. /mt