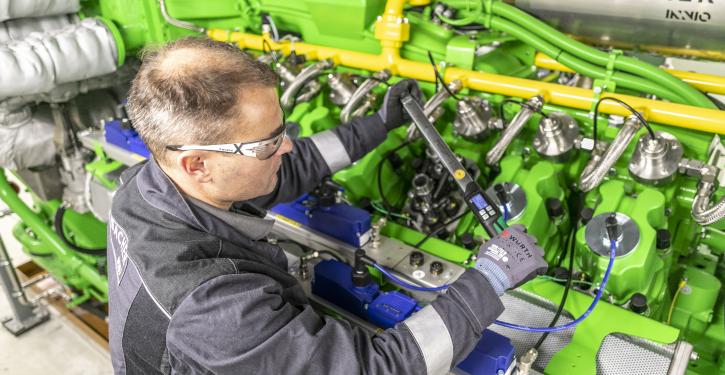 In a second series of tests, Hansewerk Natur looked at the efficiency and performance of the converted engines. (Image: Innio Jenbacher)
Hamburg (energate) - The Eon company Hansewerk Natur has recorded an increase in performance in a second test series of its hydrogen CHP plant in Hamburg-Othmarschen. In hydrogen operation, the output of the combined heat and power plant increased by around ten per cent, and in peak load operation even by more than 20 per cent, the company announced. Together with the gas engine manufacturer Innio, Hansewerk Natur is conducting a field test for the use of up to 100 percent hydrogen in a combined heat and power plant (CHP) with a Jenbach engine of the 1 MW class (energate reported). In a first series of tests, the basic feasibility was demonstrated. In the second series, the focus was now on efficiencies and performance.

"We added 25 per cent by volume of H2 - significantly higher than the maximum value of ten per cent by volume previously permitted in the gas grid", project manager Jens Kuglin explained. During the test series, the electrical efficiency in mixed operation with natural gas and hydrogen was significantly higher than the values in natural gas operation. The heating network operator had thus not only achieved the goal of operating the combined heat and power plant in natural gas-H2 mixed operation with the same efficiency as with natural gas, but even increased it by 0.7 per cent.


Preparation for changes in the gas grid


Hansewerk Natur operates more than 200 CHP engines in northern Germany. With the tests, the heating network operator is preparing for future changes in the gas network through the admixture of hydrogen. "Hansewerk Natur is gathering valuable know-how in this pilot project in order to operate the CHP units in future with a natural gas-H2 mixture with the highest possible efficiencies", technical managing director Thomas Baade says. With the test series, the heat supplier is also preparing for the heat and power supply of entire neighbourhoods via pure H2 networks. /tc