Government: No doubts about nuclear phase-out 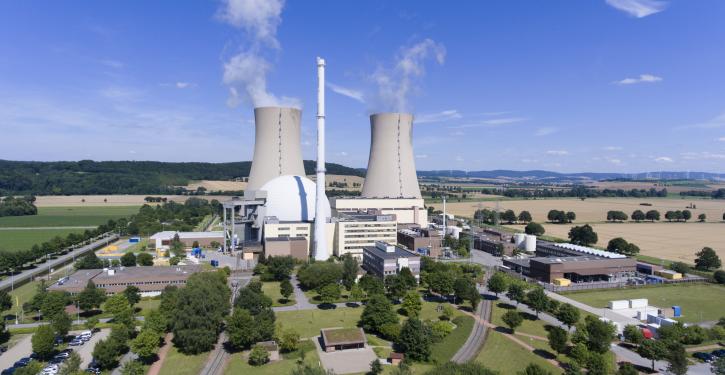 The Grohnde power plant will be taken off the grid by the end of the year. (Image: PreussenElektra)
Berlin (energate) - The new federal government leaves no doubt about the nuclear phase-out. "The nuclear phase-out has been decided and is valid," declared Federal Economics Minister Robert Habeck (Greens) shortly before the shutdown of the three nuclear power plants Brokdorf (Schleswig-Holstein), Grohnde (Lower Saxony) and Gundremmingen C (Bavaria). According to the nuclear phase-out agreed in 2011, the three reactors must cease operation by 31 December 2021 at the latest. Then only the three reactors Emsland in Lower Saxony, Isar 2 in Bavaria and Neckarwestheim 2 in Baden-Württemberg will remain active nationwide. They must be taken off the grid by 31 December 2022 at the latest.

A spokesperson for Economics Minister Habeck emphasised again at the Federal Press Conference that the procedure for shutting down the remaining German nuclear power plants is "clearly regulated by law". There is no reason to change this. The security of supply in Germany is still very high in international comparison. This is also shown by the "Saidi value" collected annually by the Federal Network Agency, which confirms that the number of power interruptions in Germany has fallen in recent years despite the energy transition. In 2020, the average power supply outage time was 10.73 minutes, the lowest ever (energate reported).


Federal Environment Minister Steffi Lemke (also Greens) stressed that by phasing out nuclear power next year, Germany will draw a line under "a highly problematic technology". Opposition politician Anja Weißgerber (CSU) pointed out in this context that the handling of nuclear waste remains unresolved. The environmental spokesperson of the CDU/CSU parliamentary group in the Bundestag warned that the existing interim storage facilities must not be allowed to become de facto final storage sites. Therefore, the search for a final repository must not be delayed. According to the current legal situation, a site for the disposal of highly radioactive waste should be determined by 2031, and a German final repository should be in place by 2050.

Olaf Bandt, chairman of the environmental organisation BUND, also complained that the coalition agreement of the new CDU/CSU government does not contain any statements on open-ended supply facilities such as the uranium enrichment plant in Gronau and the fuel element factory in Lingen. They will still be in operation after 2022. "We call on the new federal government to completely phase out the nuclear chain," Bandt said. His organisation also demands that nuclear energy should not be classified as sustainable in the future EU taxonomy. /cs