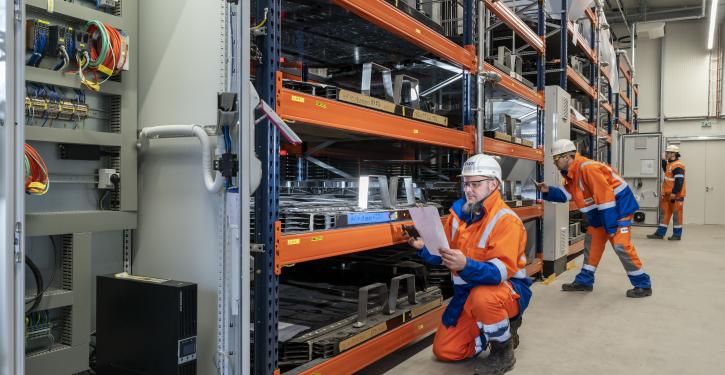 Findings from the reference storage system should help RWE to build larger storage systems based on e-car batteries in the future. (Image: RWE)
Essen (energate) - The energy company RWE has commissioned an energy storage system made from used e-car batteries in Herdecke, North Rhine-Westphalia. The lithium-ion batteries come from electric vehicles made by Audi. With the help of 60 battery systems, the new storage facility on the site of RWE's pumped storage power plant at Lake Hengstey will be able to temporarily store around 4.5 MW of electricity, the company announced.

Audi previously used the decommissioned batteries provided for the project in E-Tron development vehicles. They still have a residual capacity of more than 80 per cent after their first life in the car, it adds. This makes these "second-life batteries" suitable for use in stationary electricity storage systems. Depending on how they are used, the batteries still have up to ten years of life left in them. In addition, they are significantly cheaper than new cells.

RWE built a 160-square-metre lightweight hall for the 60 batteries, which weigh around 700 kilograms, on the grounds of the pumped-storage power plant in Herdecke. The installation of the battery systems was completed in October. Commissioning of individual components began in November. RWE says it expects to market the storage capacity of its Second Life battery storage system from the beginning of 2022 - initially to support the electricity grid as part of frequency maintenance. After that, RWE plans to test further marketing methods. /ck