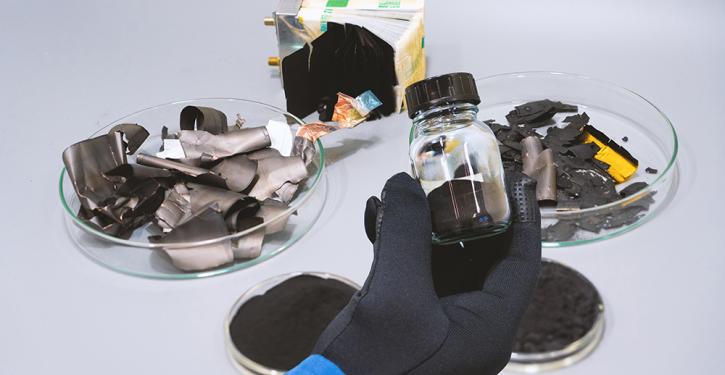 The country representatives could not agree on how strict the rules for battery recycling in the EU should be. (Image: Fraunhofer IKTS)
Brussels (energate) - The 27 EU environment ministers have made little progress in their negotiations on the new EU Battery Regulation. As under the Portuguese Presidency, the environment ministers were unable to agree on a joint position paper on the EU Commission's proposal under the Slovenian Presidency. The upcoming French Council Presidency is now expected to master this problem. The complex regulation, which applies to batteries of electric cars, e-bikes and scooters, among other things, contains sustainability regulations for the entire life cycle of batteries. The EU Commission had already presented it in December 2020 (energate reported).

The time for its adoption is pressing: in 2023, battery production for e-cars is expected to increase sharply in the EU. According to the Slovenian environment minister Andrej Vizjak, the 140-page draft regulation of the EU Commission has not been clarified in the committee, among other things, how the chemicals used in batteries are to be handled, the legal basis of the regulation or the extended manufacturer liability.


The latter is to apply to batteries produced for the first time in a Member State. This includes that battery producers have to fulfil waste management obligations. "Extended producer responsibility is a declared goal of the new German government", the new German environment minister Steffi Lemke (Greens) also affirmed at the meeting. Concerning the legal basis of the regulation, Lemke expressed a veiled rejection: "It is important that our existing and effective collection structures in the battery sector are preserved." Many environment ministers, including those from Germany and Austria, fear a "downward harmonisation" in the collection and recycling of spent batteries and demand that the basic principles of the EU Treaty on Environmental Policy apply here.

The EU Commission, on the other hand, insists on justifying the regulation solely on the basis of the provisions of the EU Treaty on the functioning of the internal market. "We need harmonised rules for a single market for recycling spent batteries", EU environment commissioner Virginijus Sinkevicius said. He said that he hoped negotiations with the EU Parliament would start in the spring. /rl