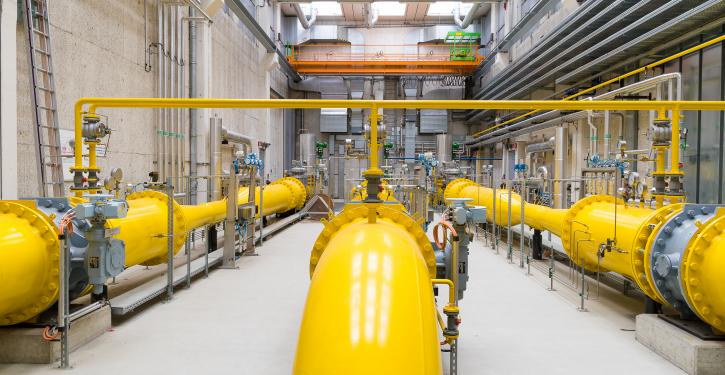 FNB Gas: Investments in hydrogen infrastructure will be around 18 billion euros until 2050. (Image: FGW, Ludwig Schedl)
Berlin (energate) - The Association of Gas Transmission System Operators (FNB Gas) expects decisive action from politicians in the expansion of the hydrogen network. "We must not make the same mistake and fall behind as is the case with the expansion of the electricity grid," warned the chairman of the board of FNB Gas, Thomas Gößmann, at the presentation of the "H2 Grid 2050" expansion plan. This also includes the prompt implementation of the measures announced in the coalition agreement, for example the creation of the necessary framework conditions with efficient funding programmes as well as the acceleration of planning and approval procedures. FNB Gas also takes a positive view of the fact that the traffic lights want to double the development target for electrolysis capacity to 10,000 MW in 2030. "Openness to technology is also central to using the existing gas infrastructure not only for hydrogen, but also for other climate-neutral gases such as biogas or synthetic methane - for an additional and quickly realisable CO2 reduction across all sectors," Gößmann emphasised.

.
According to calculations by FNB Gas based on the results of Dena's Guideline Study I, the demand for hydrogen in 2050 would be 504 billion kWh, with a peak demand of about 110 GWh/h. Combined with synthetic methane and biogas, the demand would be about 824 billion kWh. According to FNB Gas, the length of the hydrogen network required for gas transport at this time would be 13,300 kilometres, of which 11,000 kilometres would be converted gas pipelines. The investment costs for the expansion and conversion of the H2 infrastructure would amount to about 18 billion euros. In view of the expansion costs in the electricity sector, these amounts are fully justified, Gößmann emphasised. When it comes to financing, however, some questions are still difficult due to the regulatory framework, he admitted in response to a question from energate. This also applies to the European regulatory proposals with the separation of hydrogen and natural gas grids. "But we want to get going," Gößmann emphasised, adding that is why the industry would start with the realisation of the IPCEI projects. Gößmann said there were eight IPCEI projects with the participation of transmission system operators and that they were part of the Hydrogen Grid 2030.

In the medium term, FNB Gas expects an H2 demand of about 71 billion kWh and a peak demand of about 10 GWh/h for the year 2030, referring to the Dena Guideline Study I. The length of hydrogen pipelines reached by then would be 5,100 kilometres, of which 3,700 kilometres would be converted gas pipelines. The investment costs would be about 6 billion euros. "Our calculations are to be understood as an offer from the industry to the politicians," Gößmann added.


Even if the coalition agreement does not limit the use of hydrogen to specific fields of application - which FNB Gas welcomes - the future consumption focus is clearly on industry. The analysis identifies the demand in 2050 in refineries at 3.6 billion kWh, in the chemical industry at 243.4 billion kWh and in the steel industry at 93.2 billion kWh. FNB Gas puts the secured generation in 2050 from H2 imports from the Netherlands, France, Norway and Russia at 42,000 MW. The conversion of cavern storage facilities in Germany would add 69,000 MW. Like the coalition partners, FNB Gas believes that a technology-neutral promotion of climate-neutral hydrogen is also necessary in this sector. Even on the basis of the lower demand development for hydrogen and gas in the updated Dena Guideline Study II, the association considers its planning to be resilient: "The hydrogen demand for power plants in the Dena II study is increasing, this would lead to higher demands on the grid," said Malte Grunwald of Gasunie Deutschland, who was jointly responsible for the calculations. /am/hl