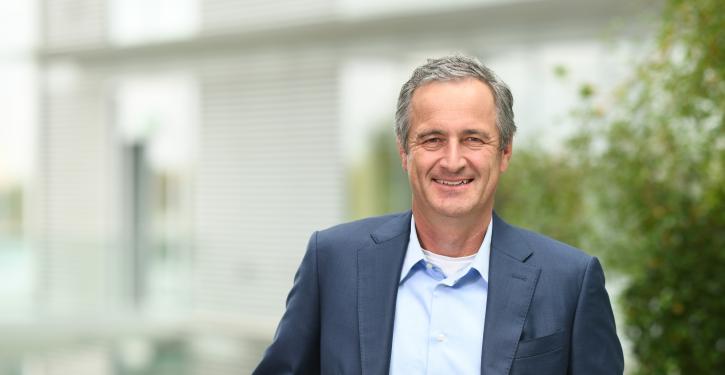 CEO Frank Mastiaux will leave EnBW AG next year. Who will take his place? (Image: EnBW/Uli Deck)
Düsseldorf (energate) - The first names are being mentioned in the still unresolved succession to EnBW CEO Frank Mastiaux. Hildegard Müller and Kerstin Andreae, the former and current managing directors of the BDEW, are among those on a shortlist for the supervisory board, reports "Manager Magazin". Müller (54) is currently president of the German Association of the Automotive Industry (VDA), but she is no longer fully happy there, the medium writes. Müller was chairwoman of the BDEW executive board from 2008 to 2016. She then worked for the then RWE subsidiary Innogy as network director until October 2019, which means she also has corporate experience.

Kerstin Andreae (53) is Müller's direct successor as chair of the BDEW executive board since 2019. Previously, she was a member of the German Bundestag as a Green Party politician. With Müller, who has a CDU party membership book, and ex-Green politician Andreae, there are thus two candidates on the EnBW shortlist who reflect the colours of the Baden-Württemberg state government. Andreae's advantage is that she comes from Baden-Württemberg and thus from the supply area of EnBW AG. In contrast to Müller, however, she has no corporate experience so far.


Mastiaux to leave EnBW in September 2022


The current CEO of the Karlsruhe-based energy group, Frank Mastiaux, had announced in June that he would not seek another term at EnBW (energate reported). This means that his post will be vacant by the end of September 2022 at the latest. According to the business magazine, internal candidates are also being considered as successors. According to the magazine, CFO Thomas Kusterer (53) has the best prospects. /rb