Brandenburg does not want to export hydrogen 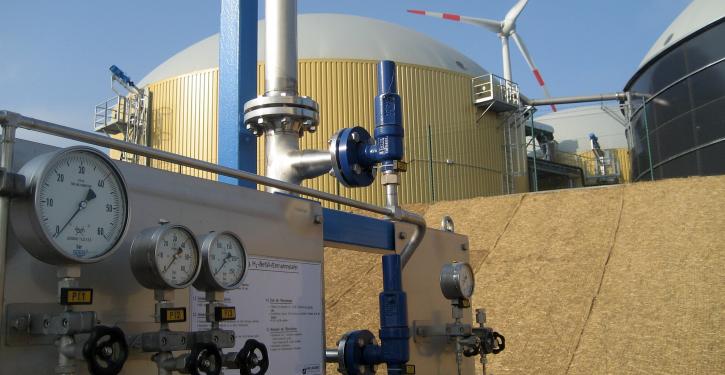 Hydrogen is already being produced in the hybrid power plant in Prenzlau. (Image: e21_cs)
Potsdam (energate) - Brandenburg wants to consume hydrogen produced in its own state. This is the result of the state's hydrogen strategy, which the government of the SPD, CDU and Greens in Potsdam has now adopted. It estimates the demand for hydrogen at 22.5 TWh in 2040. It is not possible to completely cover the demand by producing green hydrogen through electrolysis, if only because of the limited amounts of renewable electricity available. "At the same time, it follows that the green hydrogen produced in BB should be used first and foremost to meet demand in the country", the strategy states. Because of the limited production possibilities, the state government wants to focus the use of hydrogen on the industrial and mobility sectors. It is not intended to use it in the heating sector.

The plan provides for a total of more than 63 measures until 2040, for example in the areas of production, use and transport as well as framework conditions. "With this strategy, we now have a very concrete roadmap for the development of a hydrogen economy in the state of Brandenburg", state energy minister Jörg Steinbach (SPD) explained. The strategy was preceded by preliminary studies and a dialogue process with companies, science and civil society, among others.


The state government wants to support the development of the hydrogen economy with two projects. A digital hydrogen marketplace is planned to bring together producers, transporters and consumers. In this way, the state government is also meeting demands from the business community. In a recent interview with energate, Andreas Huck, CEO of the energy supplier Leag, complained about the lack of transparency in the hydrogen market. "As an investor, I have to know in advance who is going to buy the hydrogen from me", Huck emphasised (energate reported). The company is planning a power plant in Jänschwalde that will also run on hydrogen. The state government also wants to set up a digital communication platform to network companies and exchange information.


Changes to the regulatory framework


Brandenburg hopes that the ramp-up of the hydrogen economy will create new jobs in the state, also to mitigate the consequences of the coal phase-out. To make this happen, minister Steinbach sees a need to make the regulatory framework "fit for hydrogen". To this end, the state government wants to get involved at the federal and EU levels. /kw