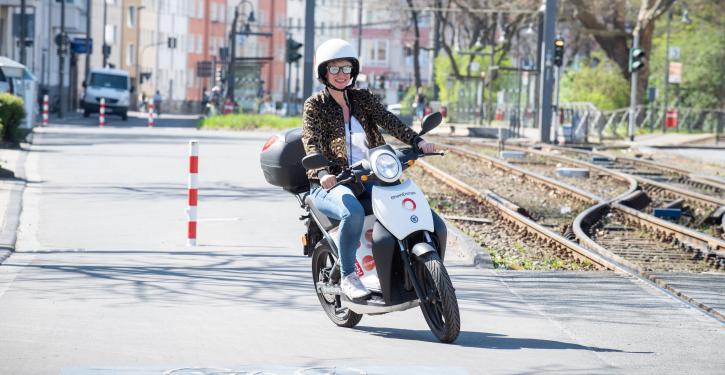 Didn't get its act together: Rheinenergie's sharing offer Rhingo ends this year. (Image: Rheinenergie AG)
Cologne (energate) - Rheinenergie will discontinue its e-moped sharing service Rhingo, which was launched in 2019, by the end of the year. Customers were informed about the expiry of the offer in order to use up any ride credit in time, the Cologne-based utility announced. Attempts to transfer Rhingo to other mobility service providers have not been successful, it said. The service will be available without restrictions until Friday, 31 December 2021.

Rheinenergie has learned a lot through Rhingo and has also gained new customers, the utility continued. However, there was a lack of profitability - probably due to the ongoing corona pandemic. In order to maintain the service as a business model, "we would have to reach a completely different scale in order to earn money with it in the long term", they explain. Direct mobility services are also "not part of the long-term core business of an energy supplier and infrastructure service provider like Rheinenergie".


Rheinenergie: Fleet should have been twice as large


In order for Rhingo to be profitable, 800 e-mopeds would have been needed instead of the recent 400, as a company spokesperson explained when asked. "This figure remains speculative, however, as current developments, such as a continued change in usage behaviour by Corona, are difficult to assess", the spokesperson continued. In 2020, it sounded different: despite Corona, the utility had doubled the Rhingo fleet from 200 to 400 e-mopeds in the summer of last year. Rheinenergie CEO Dieter Steinkamp explained that the sharing offer shows "that successful climate protection for Rheinenergie is no longer limited to energy supply, but also includes sectors such as mobility" (energate reported).

In response to the energate question about how heavy the losses caused by Rhingo are today, the company spokesperson referred to its character as a pilot project. Rheinenergie does not comment on investments and losses in such projects. /dz