After Glasgow, the traffic lights should deliver 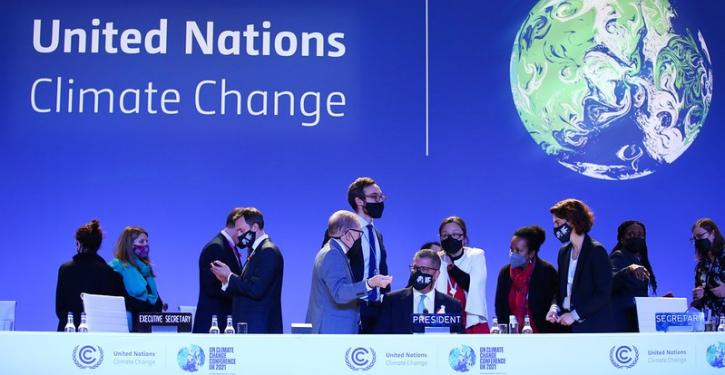 The climate conference in Glasgow ended on 13 November. (Image: unfccc)
Berlin - Despite the weakened final declaration, the acting Federal Environment Minister Svenja Schulze (SPD) sees the international climate conference in Glasgow (Cop 26) as a signal for an irreversible coal phase-out worldwide. Environmental organisations now also see the possible traffic light coalition as having a duty. Shortly before the end of the conference, the wording of the final declaration was changed under pressure from China and India. Now there is talk of cutting back on coal instead of phasing it out as before. The statements on the end of fossil subsidies had already been watered down in previous versions (energate reported).

"What we witnessed in the final phase in Glasgow was a last gasp of the old, fossil energy world," emphasised Germany's Environment Minister Schulze on the day after the end of Cop 26. She, too, would have liked clearer statements on the coal phase-out. "Regardless of individual words in the final declaration, the political signal remains that the global coal phase-out has been initiated and is irreversible," she said. A number of countries, including Germany, also pledged in Glasgow to no longer finance oil, natural gas or coal projects abroad.


The climate conference ended one day late on 13 November. The final declaration includes a call to all countries to increase their efforts to reduce CO2 and methane emissions in this decade. It formulates the goal of limiting warming to well below 2 degrees. According to the paper, greenhouse gas emissions should be reduced by 45 percent worldwide by 2030 compared to 2010. It also contains a call to intensify the commitment to the development of alternative technologies. Questions remain about financial support for countries affected by climate change. The 100 billion euros that are supposed to be provided annually by the industrialised countries from 2020 onwards have not yet been reached. Agreement was reached on the accounting of international climate protection projects.

Environmental organisations assess the outcome of the climate conference as cautiously positive. For the first time, the international community has clearly stated the seriousness of the climate crisis. "The end of fossil fuels is approaching," said Martin Kaiser, Executive Director of Greenpeace Germany. However, the resolutions still lacked clarity and speed. Brick Medak of the NGO E3G also assessed the outcome positively and added: "The states will be judged above all by whether they sufficiently tighten up their climate targets by the next climate summit next year."


The municipal utilities association VKU used the conclusion of the climate summit to appeal to the coalition leaders-to-be at the federal level, i.e. the SPD, the Greens and the FDP. There is no time to lose in the fight against climate change. "This must also be the premise of the new federal government's climate policy. We need an energy transition acceleration programme," explained VKU President Michael Ebling.

The companies united in the Climate Alliance expressed similar sentiments in a joint statement on 14 November. The new federal government must agree on a coalition agreement with the goal of reducing emissions by 70 percent by 2030 compared to 1990. To achieve this, the coal phase-out must be implemented by 2030. The EU must now also increase its climate targets for 2030, in the direction of a 65 percent reduction in emissions, the Climate Alliance demanded.

The German Wind Energy Association was disappointed. "Glasgow would have been the chance to redefine the major climate policy framework globally," said President Hermann Albers. However, with a focus on wind energy, photovoltaics and other renewable energies such as biomass or hydropower, the 1.5-degree target could still be achieved, he added. /kw