Daimler cooperates with Total in the construction of hydrogen filling stations 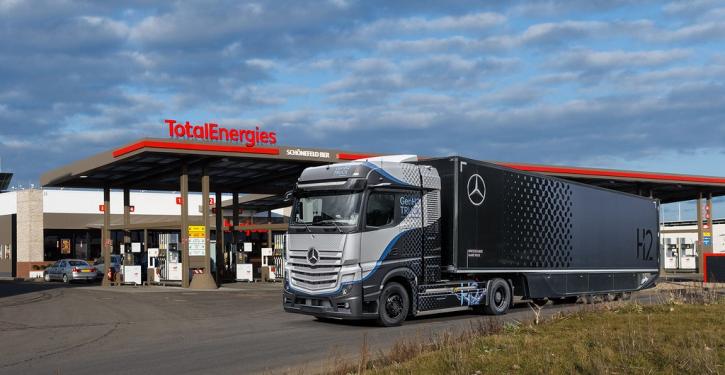 Total plans to operate up to 150 hydrogen filling stations in Germany and elsewhere by 2030. (Image: Daimler Truck AG)
Stuttgart/Paris (energate) - Daimler Truck and Total Energies want to jointly build a hydrogen infrastructure for heavy trucks in Europe. The partners signed an agreement to this effect on 10 November, they announced. According to the agreement, the cooperation covers hydrogen procurement including the associated logistics, the supply of hydrogen to filling stations, the development of hydrogen-based trucks, the establishment of a customer base and other areas. The French oil company has set itself the goal of operating up to 150 hydrogen filling stations in Germany, the Netherlands, Belgium, Luxembourg and France by 2030, it adds. Daimler Trucks will also supply hydrogen-powered fuel cell trucks to its customers in the Netherlands, Belgium, Luxembourg and France by 2025 as part of the cooperation.

Daimler Trucks has placed a focus on the development of hydrogen mobility. With the Swedish carmaker Volvo, Daimler has also founded the joint venture Cellcentric, which produces fuel cell systems for stationary as well as mobile applications. Recently, the plant manufacturer Rolls-Royce has been cooperating with Cellcentric (energate reported). Another focus of the German group is on electrically powered trucks - and on the matching charging infrastructure. In mid-2021, for example, Daimler agreed with Volvo and the Volkswagen subsidiary Traton to build 1,700 high-performance charging points for e-trucks in Europe. The partners are planning to spend half a billion euros on this (energate reported). /dz