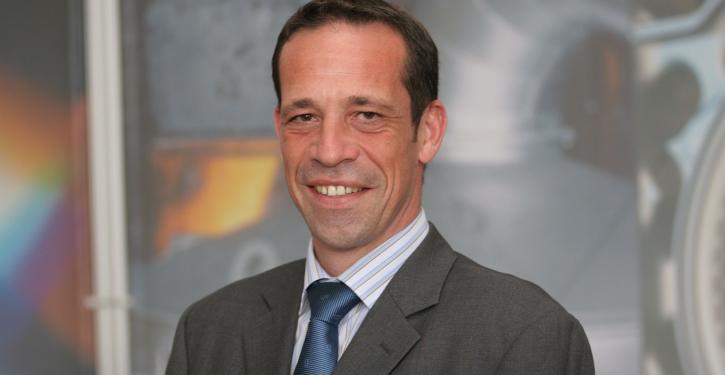 Thorsten Herdan: Different interest groups block each other. (Image: Produktion.de)
Berlin (energate) - The Ministry of Economics warns against a blockade in view of the discussion about the sustainability of hydrogen. "I am extremely worried about the market ramp-up for hydrogen", Thorsten Herdan said in a keynote speech at the Dena Energy Transition Congress in Berlin. Herdan is Head of Energy Policy II - Heat and Efficiency at the Federal Ministry of Economics and Technology. His keynote speech was part of the panel "Hydrogen - how do we make the breakthrough?". "When it comes to the question of colour and choosing the right markets, we get each other down", he said, naming two central points where different interests block each other. He urged not only for "more serenity" and thus an acceptance also for blue hydrogen, but also for the use of electricity for electrolysis. The sense of the criterion of additionality for electricity from renewable energies is not clear to him. This criterion for electricity used to produce hydrogen in electrolysis plays a major role in the political discussion. Among others, the National Hydrogen Council proposes it in a position paper for imports of green hydrogen (energate reported).


"No reason for composure"


On the podium, Christiane Averbeck, executive director of Klima-Allianz Deutschland, vehemently contradicted Herdan. She is a member of the Hydrogen Council and is considered the main initiator of the paper. There is no reason for complacency, she stressed, because people only want green hydrogen. The central goal, she said, was climate protection, and for that to happen, the phase-out of natural gas had to take place. A prerequisite for the production of hydrogen is the expansion of power generation from renewable energies and therefore additionality is also a correct criterion. Averbeck called for more speed in the development of seasonal storage facilities as a prerequisite for the hydrogen ramp-up. She also called the conversion of individual natural gas pipelines to hydrogen a "no-regret measure".


When it comes to network expansion, the transmission system operators are more aggressive, OGE management spokesman Jörg Bergman emphasised. The association of transmission system operators has recently published on its website a possible H-2 network 2030 and an H2 network 2050, he explained. By 2030, the network could provide a peak capacity of 10,000 MW and transport an annual volume of 70 TWh. Bergmann called for rapid investments and repeated the demand of the transmission system operators for joint financing of natural gas and hydrogen networks. This is not possible due to the regulation of hydrogen networks in an amendment to the EnWG in 2021. However, a rethinking process seems to be taking place in the Federal Ministry of Economics. When it comes to infrastructure, a different "way of thinking" is needed and it must be made available to society, Herdan said and announced that this would be discussed anew. On the sidelines of the event, it was said that this could mean that the ministry was considering a state network company for hydrogen.


Another important issue for Herdan was the future funding of the "H2-Global" foundation. It will receive 900 million euros to compensate for the difference between the production costs for hydrogen in countries where conditions are good and the willingness of consumers in Germany to pay for it. This could only be the beginning, the foundation would need more funds in the future, Herdan said, adding that an H2Europe foundation should also be considered. /hl