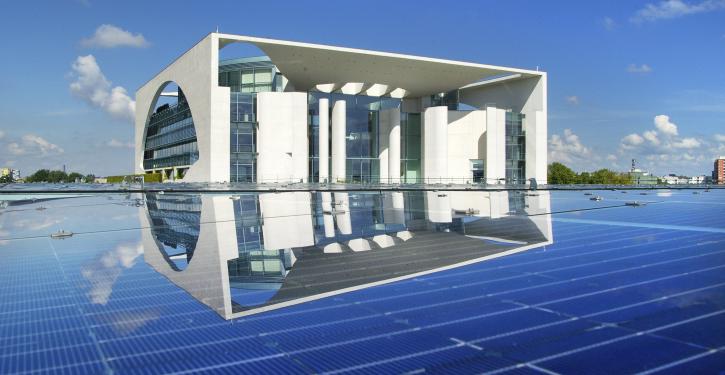 The Federal Government adopts the Climate Protection Report 2020 on 3 November. (Image: BSW-Solar/Langrock)
Berlin (energate) - Without the climate protection law, which will be tightened in spring 2021, Germany would clearly miss its CO2 targets. This is shown by the Federal Environment Ministry's Climate Protection Report 2020, which the current Federal Government intends to adopt on 3 November, parallel to the Climate Conference in Glasgow. It is available to energate. According to the report, CO2 emissions fell by 40.8 percent from 1990 to 2020. Although this means that the own target for this period was achieved, it was only helped by the corona-induced drop in emissions in 2020. According to the report, this effect contributed to about one third of the drop in emissions by more than 70 million tonnes last year. The Expert Council on Climate Change even estimates the corona effect on the emissions decline at 50 per cent.


The outgoing German government nevertheless attests to the success of its measures: The climate and energy policy instruments are working, the report says. "The structural progress in the restructuring of the national economy towards climate neutrality is decisive." This has been achieved with a package of funding, market incentives and regulatory law. Nevertheless, in terms of all measures adopted by 2020, the report shows that the targets have not been met. "Assuming rising prices in EU emissions trading, as can currently be observed, a reduction of 51 percent by 2030 was calculated." However, the CO2 target for 2030, valid until summer 2021, was minus 55 per cent. In the meantime, it has even been raised to 65 percent, and the climate protection law has been tightened accordingly (energate reported).


For the last time, the Climate Protection Report contains an implementation status of the measures of the "Climate Protection Action Programme 2020" adopted in 2014. This was supposed to achieve a CO2 reduction of 62 to 78 million tonnes of CO2 equivalents by 2020. This target was also missed: "Based on the available data on the implementation status and parameterisation, the greenhouse gas reduction effect for the year 2020 is estimated at 42.2 to 51.7 million tonnes of CO2 equivalents," the report states. /kw