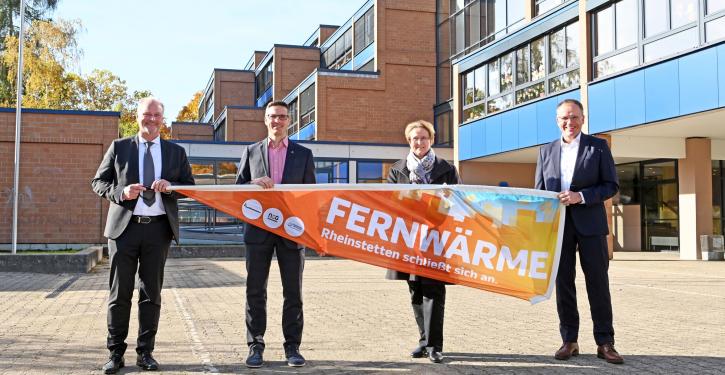 Commissioning for the new district heating network in Rheinstetten. (Image: Stadtwerke Karlsruhe/Uli Deck, ARTIS-Photographie)
Rheinstetten (energate) - The town of Rheinstetten in Baden-Württemberg is connected to the Karlsruhe district heating network. After about three and a half years of construction, the four-kilometre-long main pipeline from the Rheinstrandsiedlung in Karlsruhe via Forchheim to the "Neue Mitte" in Rheinstetten with several branching distribution lines was put into operation this week. This was announced by the municipal utilities company Stadtwerke Karlsruhe. The pipeline has a connection capacity of 11 MW and is designed to supply around 1,200 residential units with heat, explained Olaf Heil, technical managing director of the Stadtwerke. The company has already received applications for a connection capacity of 6.5 MW.


"For us, this is an absolute gain", Rheinstetten's mayor Sebastian Schrempp (CDU) said on the connection to the Karlsruhe grid. "With district heating as a low-emission heating energy, we are taking another big step towards the energy transition." According to Gabriele Luczak-Schwarz (CDU), first mayor of Karlsruhe, the expansion of district heating is the largest climate protection project in her city: "I am all the more pleased that it now crosses the municipal boundary and that together we are advancing the heating turnaround at regional level." /tc