First hydrogen admixture on the horizon in Saxony-Anhalt 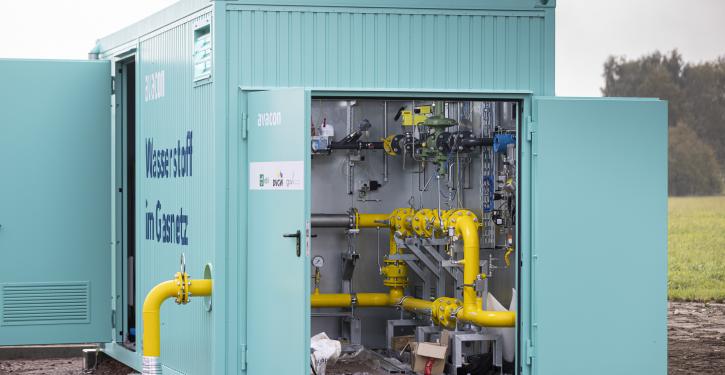 The hydrogen admixture plant is scheduled to start operation in December. (Image: Avacon)
Helmstedt (energate) - In December, the grid operator Avacon wants to add the first quantities of hydrogen to its gas distribution grid. Since the Eon grid subsidiary had to do an unexpected amount of convincing with its customers and individual devices were not approved for hydrogen combustion, the project has been delayed by a year (energate reported). In the meantime, four unsuitable appliances have been replaced by modern, hydrogen-compatible new appliances, Avacon announced together with the project partner, the German Technical and Scientific Association for Gas and Water (DVGW). The results of the project are to serve as a model for the future use of hydrogen in gas distribution networks and are also to be incorporated into the DVGW's rules and regulations. So far, there have only been laboratory tests in which the operation of "many" appliances used with up to 30 per cent hydrogen admixture was possible without any problems.


Gradual increase to 20 per cent


Avacon and DVGW had already launched the project at the end of 2019. In five-percent steps, the participants wanted to increase the proportion of hydrogen from the currently permitted less than 10 per cent to as much as 20 per cent. For the test, Avacon chose a representative network section with around 350 connected customers, but without industrial customers or natural gas filling stations. SHK craftsmen and chimney sweeps from the region were already approached at the beginning of 2020, the citizens' meetings in Drewitz and Schopsdorf did not follow until September 2020 due to corona.

Parallel to the inspections of the gas appliances, the technical planning and construction of the hydrogen admixture plant was underway. This is scheduled to go into operation at the end of the year. In the first four weeks, only 10 per cent hydrogen is planned; the 15 per cent admixture is to take place in the first quarter of 2022. According to an evaluation, the target concentration of 20 per cent hydrogen is to be reached at the end of the heating period. In addition to admixture that is as uniform as possible, fluctuations are being tested in order to replicate volatile renewable energies as hydrogen sources. /mt